Ireland under attack from spiders that are wiping out native species 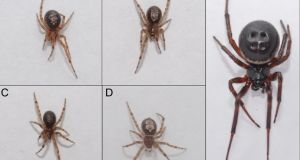 For the past 20 years Ireland has been subjected to an invasion of false widow spiders that are wiping out their indigenous cousins and are now threatening humans.

The false widow spider is more venomous, lives longer and breeds faster than the common house spider in Ireland.

The false widow is proliferating at an alarming rate. It was first found in Co Wicklow in 1998. Since then, it has been found in 16 counties, almost exclusively in urban areas. Over a period of 18 months, 620 specimens were obtained from a single row of semi-detached houses in Lucan, Co Dublin.

It is now starting to attack humans with three reported cases in Ireland, in Galway, Cork and Dublin respectively, in recent years . There are likely to be many more unreported cases.

Fortunately, the Irish victims had the presence of mind to capture the offending spiders after they bit them. One victim even captured the culprit alive.

Scientists at NUI Galway have now for the first time identified the symptoms of a false widow spider bite.

They range from intense pain at the bite site, redness of the skin, swelling of limbs, itchiness and in rare cases feverishness, facial flushing and sweating.

The good news, so far as there is any, is that at least the false widow spider does not kill humans, unlike the deadly black widow spider which it resembles but which does not live in Ireland.

Dr Michel Dugon, the head of the research team based at the Venom Systems and Protemoics in NUI Galway, said the false widow can be identified by its polygon-shaped body with a cream and white back, although there are variations that have a dark back. The rest of the spider is black with dark reddish legs. It is small but dangerous.

He recommends that people who are bitten by a false widow should get painkillers and anti-inflammatories from their doctor. In extreme cases, they can access black widow anti-venom, which is stored in Liverpool and which works on the bite of a false widow.

However, he added that as a zoologist, he is more concerned for the fate of indigenous species of urban spider under threat from the invasive interloper.

“That species lives a lot longer, lays a lot more eggs, has a venom that is a lot of more potent and is therefore capable of bullying native species, displacing them and taking over their habitat,” he said.

“That can have some serious consequences for our ecosystem. In some urban areas, we have noticed where we should find common urban spiders, we don’t find them anymore, but, instead, we find hundreds and hundreds of false widows.”

Scientists are blaming the proliferation of the spider on global commerce. The first false widow in the UK was carried over on a boat from the Canary Islands.

“What we are observing in Ireland is also happening in most countries in Europe, west Asia and the United States. In California, the false widow is becoming a real problem.”