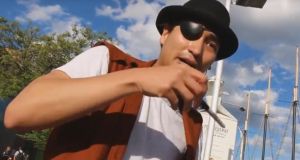 Two teenagers are facing trial for taking part in a serious attack on O’Connell Street in Dublin that left a Canadian street performer blind in one eye.

The pair, aged 18 and 17, appeared at Dublin Children’s Court, where books of evidence were served on them. Judge John O’Connor said they were being returned for trial on indictment to Dublin Circuit Criminal Court, where they will face their next hearing on November 10th.

Both are charged with taking part in violent disorder together and with others on September 9th last year. The older youth has been further charged with intentionally or recklessly causing serious harm to street performer Mark Beltran (30) at O’Connell Street on the same date.

His 17-year-old co-accused faces two counts of assault causing harm to Mr Beltran and another man on Henry Street, Dublin, as well as a further charge of attempted theft.

Mr Beltran, a magician who travelled the world with his act, was hospitalised and treated for serious injuries that left him permanently blind in his left eye, which he has since lost. He had been in Ireland for just two days prior to the incident, which occurred after he had retrieved an amplifier that had been taken from him while he was performing in the city centre.

Coronavirus: Cabinet considers scrapping 20km limit and allowing some pubs to reopen 10:05
Sinn Féin TD confirms he broke travel limit to attend funeral 10:00
‘Up to 40%’ of close contacts of meat plant workers with Covid not traced 09:21
Gerry Adams asks Irish-Americans to lobby for unity referendum 09:06
More than 200 Syrians cleared to travel to Ireland once restrictions lifted 07:53