Irish officials unable to visit Halawa in prison despite acquittal 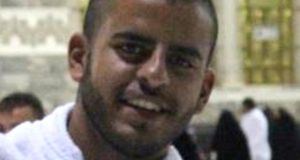 Ibrahim Halawa: the Taoiseach said he assumed the Irish Embassy in Cairo still had access to him. Photograph: PA Wire

Irish officials have been unable to visit Ibrahim Halawa in prison since his acquittal by an Egyptian court more than two weeks ago.

The Department of Foreign Affairs confirmed there had been no access by consular staff during that time due to the “change in status” of his case.

They have applied for a visit, which is expected to take place next week unless Mr Halawa is released in the meantime.

A department spokesman said officials had also been keeping in touch with the Halawa family as questions continue over exactly when the 21-year-old will be allowed to walk free from prison, bringing to an end to more than four years in custody.

In the Dáil on Wednesday, Taoiseach Leo Varadkar was asked if the Embassy still had access. He said he would check but assumed so as they would require it to give Mr Halawa his passport.

In Egypt official release papers have been delayed by authorities. Mr Halawa’s sister Nosayba is in the country and has been able to visit but has found it difficult to access information on the final stage of her brother’s custody.

Sinn Féin MEP Lynn Boylan, who has maintained contact with the family, said they were frustrated at the protracted release.

She said she was concerned for Mr Halawa’s mental health, “going from thinking you are going home to getting all this delay again”.

Mr Varadkar said his family wanted to keep arrangements for his return private, and the Government had no confirmation of a release date.

The Taoiseach told the Dáil he had written to Egyptian president Abdel Fattah el-Sisi, while Minister for Foreign Affairs Simon Coveney had spoken to foreign minister Sameh Shoukry “to request his help in expediting the process”.

Mr Halawa (21) was arrested during a protest in Cairo in 2013 in support of ousted then president Mohammed Morsi. Three of his sisters who were arrested with him but released on bail three months later have also been acquitted of charges relating to the demonstration.

In the Dáil, Sinn Féin leader Gerry Adams asked the reason for the delay in release, saying “arguably he is illegally held”.

Fianna Fáil leader Micheál Martin said it was a matter of grave concern that the case took so long and “this cannot be let go where it relates to our relationship with Egypt”.

He said “it cannot be merely ‘all is forgiven’ ” and there had to be some evaluation of an Irish citizen being held for four years in prison without any due process. He added that the practices of the current Egyptian government were “unacceptable, particularly in relation to human rights and due process”.

The Taoiseach said that since Mr Halawa’s acquittal “the Government remains focused on ensuring he gets home as soon as possible”.

The Department of Foreign Affairs and the Irish Embassy in Cairo is liaising closely with the Halawa family, including on travel arrangements, Mr Varadkar said. The Irish authorities and Mr Halawa’s legal representatives remain in ongoing contact with the Egyptian authorities.

“We have no confirmation at this stage on when Ibrahim will be returning home to Dublin but his family have indicated they wish to keep the arrangements for his return private and I think everyone will want to respect that,” he said.

Mr Martin said “he and his family had received considerable support from the Irish people, which has to be acknowledged”.

The Taoiseach told Mr Martin that in terms of normalising relations with Egypt, this case had been the State’s most significant engagement in the past four years.

“We have maintained diplomatic relations with Egypt and cordial relations at Government-to-government level throughout.”

The Taoiseach said the State would not step back from raising human rights issues with Egypt or other countries and he did not believe relations could go back to normal overnight.

“Nonetheless it is very much the wish of the Government that we normalise relations with Egypt.”