Ireland should reclaim Ernest Shackleton as an ‘Irish hero’ 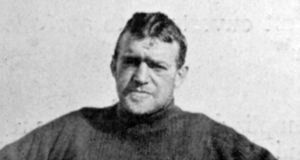 Explorer Ernest Shackleton seen in Antarctica in 1909. He made three expeditions to the Antarctic, but is best known for the ‘Endurance’ expedition of 1914-1916 when the ship became trapped in the ice and Shackleton and five colleagues made an epic journey to South Georgia to seek rescue. Photograph: Getty Images 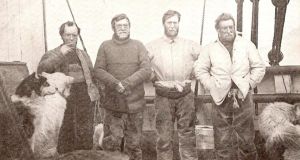 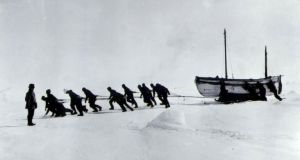 Sir Ernest Shackleton’s crew haul the James Caird, after their ship the Endurance broke up in the ice in 1916, with Shackleton looking on. Photograph: PA

Ireland should “reclaim Ernest Shackleton as an Irish hero” by erecting a monument to him in the country of his birth, according the author of a new biography of the polar explorer.

English author, Michael Smith said Shackleton fully deserved to be honoured in Ireland for his exploits in Antarctica and in particular the astounding story of the voyage of his ship, The Endurance.

“It’s not for me as an outsider to say who should Ireland commemorate and whose statues they should put up but I would say, if asked, yes, I really think they should [commemorate him].

Mr Smith, who has just written Shackleton - By Endurance we Conquer, is an authority on polar exploration, having written extensively on the subject for many years.

His latest work, published by the Collins Press, traces Shackleton’s life from his birth in Kilkea House near Athy in Co Kildare in 1874, including his move with his family at the age of ten to England.

Shackleton joined the Royal Navy and was a member of Captain Robert Scott’s Discovery team before then getting within 156kms of the South Pole on the 1908 Nimrod expedition, said Mr Smith.

“However, it was the Endurance expedition exactly a century ago which cemented his legend, with the ship being crushed in the ice, sparking a remarkable journey to safety for his crew,” he said.

According to Mr Smith, the Endurance story, where Shackleton displayed remarkable leadership to save his crew of 28, puts him on a par with Christopher Colombus and Captain James Cook.

Mr Smith attributes the lack of any major monument to Shackleton in Ireland, save for a modest plaque on a house where he lived for a period in Donnybrook in Dublin, to his Anglo-Irish heritage.

“He was of Quaker stock and his Anglo-Irish upbringing and move to London characterised Shackleton as one of life’s outsiders - too English in Ireland, but too Irish in England,” he said.

“Apart from the small plaque in Donnybrook, the most notable recognition for Shackleton lies 240,000 miles away on the Moon where the Shackleton Crater stands at the Moon’s South Pole.

“To me, it is extraordinary the only commemoration in Ireland to Shackleton is that tiny plaque in Donnybrook - it’s time Ireland recognised Shackleton and erected a statue in an appropriate place.”