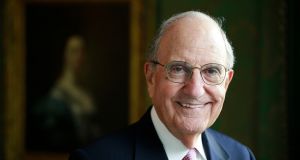 Ireland’s growth as an international business hub rather than Brexit was the driving force in attracting global law firm DLA Piper, according to its chairman emeritus, former US senator George Mitchell.

The law firm’s new Irish office was officially opened by the Northern Ireland peace-deal broker at an event in Dublin on Wednesday.

Mr Mitchell discussed Ireland’s potential as a global centre for legal services post-Brexit with Minister for Justice Charlie Flanagan during his visit. He described the arrival of DLA Piper in Dublin as “a vote of confidence in Ireland as a good market”. The firm has 90 offices in more than 40 countries.

“We think Ireland is going to experience continued growth whatever happens with Brexit, though you can imagine some scenarios that will be better than others,” Mr Mitchell told The Irish Times.

“The growth of Ireland as a hub for international business isn’t a new phenomenon and isn’t going to end. We think it’s good business to do business in Ireland, servicing not just companies based here but companies elsewhere.”

The firm has recruited seven partners, led by managing partner David Carthy, formerly of William Fry solicitors, and plans to grow its staff to as many as 100 solicitors and business executives in the coming years.

Brexit has led international law firms to set up in Dublin and inspired a surge in UK-based lawyers joining the Irish roll of solicitors amid fears that they could lose international business and legal protections in EU cases.

This was not a factor for DLA Piper, said the former Democratic congressional leader.

“We did not base this on Brexit, and we do not expect Brexit to determine our future, we’re here to stay,” said Mr Mitchell. He spoke optimistically about EU-UK future relations, saying that the EU had “fashioned unique individual agreements” with Norway, Switzerland and Canada and hoped it “could fashion one with the UK”.

The former peace negotiator, whose years-long efforts helped lead to the 1998 Belfast Agreement underpinning the Northern Ireland peace process, warned of the risk of a return to a hard Irish Border as a result of Brexit.

“It would certainly violate the spirit of the Good Friday Agreement and have the adverse effect of increasing the possibility, however slight, of a renewal of political violence,” he said.

He lamented the fact that the EU without the UK would be “a much diminished entity” without the bloc’s second largest economy and “foremost military power” in the union.