Ireland has had one of its mildest winters in recorded history

Mild spring not forecast to continue with freezing temperatures predicted 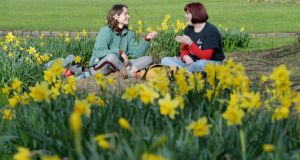 All parts of the country had temperatures well above normal for the season, but temperatures in the Phoenix Park were nearly two degrees above the long-term average.

The weather station, which is the one for central Dublin, recorded a mean temperature for the months of December, January and February of 7.1 degrees, 1.9 degrees above the winter average.

This is the highest winter temperature (winter being December, January and February for meterological purposes) since records began there in 1855.

It was also the mildest winter in recorded history at the Valentia Observatory in Co Kerry going back to 1893. Its winter mean of 9.1 degrees was 1.7 degrees above normal.

It was the warmest February on record at the station and it also recorded its highest ever winter temperature of 17.2 degrees on February 26th.

All parts of the country had significantly warmer winters than normal. Cork Airport’s was the warmest since 1961/1962, Mullingar since 1949/1950 and a number of weather stations including Shannon Airport had their warmest winter since 1988/1989.

The New Year was one of the warmest in living memory with painted lady butterflies being spotted in Co Cork on New Year’s Day – they are supposed to be a species only ever seen in Ireland in summer time.

In January, Irish Times readers sent us photographs of roses in bloom and cherry trees blossoming.

There were reports too online of people cutting their grass and birds building nests three months earlier than is normal.

Met Éireann climatologist Paul Moore said the mildness of the season may be down to global warming.

“This is what you would expect in a warming climate,” he said. “The high pressure in the last half of February that sat over mainland Europe drew in southerly winds for the guts of two weeks which gave us a very mild last two weeks in February.”

It was also a drier winter than normal. There was below average rainfall in all but three weather stations. The Phoenix Park had just 66 per cent of its normal rainfall, its driest winter in 13 years.

The mild winter are in marked contrast to last year when the month began with the country in the throes of the Beast from the East.

It looks like the mild start to the spring is not likely to continue.

Saturday will be cloudy and windy and Sunday will feel a lot colder than of late with highs of just 8 to 10 degrees and temperatures will fall to freezing on Sunday night.

It will continue to be cold and blustery next week.