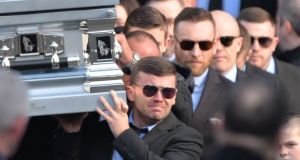 Liam Byrne (centre) carries his brother David’s coffin at this funeral in Dublin in 2016. Photograph: Photograph: The Irish Times

The former home of drug gang leader Liam Byrne has been forfeited to the Criminal Assets Bureau.

The house was among more than 50 assets - including property, jewellery and luxury vehicles - to be targeted in a three-year investigation by Cab into members of Byrne’s gang.

The house at 2 Raleigh Square, Crumlin, Dublin, is registered to Maria Byrne. She is a sister of Liam Byrne (38).

Another brother, David Byrne (32) was shot dead in a gun attack by the Hutch faction at the Regency Hotel, north Dublin, three years ago. That attack was part of the Kinahan-Hutch feud which has to date claimed 18 lives.

However, while Maria Byrne had been living at the house of late it was the previous home of Liam Byrne, his partner and their two children. He had been paying a sum to his sister which appeared to be a rent payment.

Maria Byrne has no involvement in crime, though the house registered in her name has now been secured by Cab. The court has allowed four months for the house to be vacated so it can be taken into the possession of Cab and sold.

Liam Byrne is the leader of the Byrne organised crime group, which is closely affiliated to the Kinahan cartel.

David Byrne was also a senior member of the group at the time of his death at a boxing tournament weigh-in.

As well as the house at the centre of the Cab case, the bureau has also secured permission to receive a sum of €26,760 from a bank account in the name of Maria Byrne.

The High Court was due to hold a hearing next week at which Maria Byrne was expected to fight efforts to take the assets. However, the court was told on Wednesday that agreement had been reached and the assets have now been forfeited to Cab under the Proceeds of Crime Act.

In March, 2016, the house was among a large number of properties raided in a day of action by Cab.

That day the bureau’s officers confiscated a fleet of luxury vehicles owned by a shelf company established to appear as a garage selling high-end cars. However, the company was a slush fund owned and controlled by Liam Byrne.

At 2 Raleigh Square, gardaí found a jacuzzi and panic room as well as bulletproof windows and reinforced security doors.

Cab officers also seized 29 vehicles, six motorbikes, jewellery and about €100,000 in cash during the day of action.

Data and documents were also taken from accountants’ and solicitors’ offices as part of the strand of the inquiry based on criminal assents.

Two days later, there were a series of raids against mid-tier drug dealers being supplied drugs by the Byrne gang for distribution to street dealers.

Those Garda raids yielded tracker devices used to secretly monitor the movement of cars, along with drugs, cash and high-value jewellery.

1 Donald Trump’s political success is based on racism
2 Ireland earns ‘right to be hopeful’ again as Government fast-tracks plans to reopen country
3 ‘White Irish people have never had to think about this’
4 Coronavirus: People to be allowed to travel anywhere in their county from Monday
5 Covid-19 restrictions: What you still can’t do this weekend
Real news has value SUBSCRIBE