What happens if the house burns down? Lottery winners speak about €175 million win 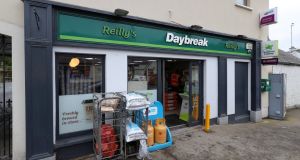 The husband of a member of the syndicate that won the €175 million Euromillions jackpot said the win will not change their lives but might change the lives of their extended family.

Gerry Brown from the Naul in north Co Dublin revealed the family syndicate is still trying to come to terms with the massive jackpot.

He recalled that when his wife realised her family syndicate had won the largest jackpot in Irish history, she put the winning ticket in an Argos catalogue.

She had only managed to get three numbers from the television so logged on to get the rest. At first the lottery site was down, but when it came back up 10 minutes later she checked the numbers and could hardly believe she had won.

“She came in to tell me. She could hardly talk. I thought I was going to have to get an ambulance for her! She was shocked.” he said. “Then we thought, ‘is it real? What happens if the house burns down?”

Mr Brown then had six vodkas after hearing the good news and slept alright.

“I’d be pretty calm, but it’s hard to get your head around,” he said.

“We will be glad when it is over. The whole week we had financial people, bank people. We are looking for privacy when it is over and let us get on with things.

“We are hoping to get back to a normal life. I was happy enough before we won it. I don’t want it to change too much. We need to give it a while to sink in. We can hardly believe it.”

Neither his wife nor the members of the syndicate have been named, but they have been named locally as the extended Sheridan family who are originally from the Naul and who live in counties Dublin, Meath and Louth.

There are nine siblings, of whom six were in the syndicate, but all will share in the winnings. The family had a €14 quick pick every week.

It is believed that 49 members of the extended family will share in the winnings.

Mr Brown said all the members of the syndicate are retired. “If I won it 30 years ago, it might be different. At our age, it’s not such a big deal. The best thing is what you can do for other people,” he said on RTÉ Radio 1’s Today with Seán O’Rourke show. “We will be able to look after our kids and grandkids and our brothers and sisters.”

Mr Brown said they took the bus into Dublin city centre with the winning ticket and passed by the crowds and the media gathered at Reilly’s Daybreak shop in the Naul where the ticket was sold. “We waved at the people going by,” he said.

The family members went in separately to the National Lottery on Thursday to collect their winnings.

They celebrated with a carvery lunch at the Bracken Court Hotel in Balbriggan, north Co Dublin, on Thursday costing €11.95 a head. “We had meetings with the bank in the hotel so that’s all that was on [the menu],” he said.

Mr Brown said he will spend his winnings on a new bicycle as he is keen cyclist. The bike he has in mind will cost €15,000. “You could pay four, five or six grand for wheels.”

Mr Brown confirmed some of the syndicate members felt like they were living in a prison given the media attention surrounding the win last week.