Temperatures plunge as low as -8.2 in parts of the country as cold snap continues 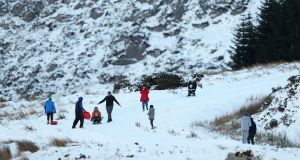 Ireland woke up to its coldest morning in almost three years on Saturday with temperatures plunging to as low as - 8.2 degrees in parts of the country.

The last time the mercury plunged so low was in March 2018.

Aoife Kealy, forecaster for Met Éireann, warned much of the country will barely make it above freezing for much of Saturday, with “treacherous” conditions predicted on the roads.

“Road surface temperatures are quite low, and it is frosty with patches of ice in places,” she said on Saturday.

“It will remain cold for much of the day – there won’t be a significant thaw. People should mind themselves on the roads, and drive with care.”

The bitter cold snap is being caused by a northerly air flow, from the polar side of the jet stream.

The east of the country is worst affected.

Where temperatures did rise above freezing by Saturday afternoon, they were expected to dip quickly again as soon as the sun sets.

In the northwest of the country and parts of north Connacht, where there is some cloud cover, it was expected that temperatures might rise to highs of 4 degrees briefly during the day on Saturday.

Saturday night is expected to be colder than normal again for the time of year, but not as severe as Friday overnight.

Temperatures are predicted to dip to as low as -3, with more risk of frost.

Sunday is forecast to be another cold start – with a risk of frost and fog – however temperatures should reach between 3 and 7 degrees during the day in parts, with the western half of the country expected to be the mildest.

Ms Kealy said it “won’t be as cold next week” as more unsettled weather moves in with a westerly air flow, and temperatures should get closer to normal for the time of year.

Highs of between 6 and 9 degrees are expected by Monday, although overnight temperatures may again plunge below freezing at times.