No reports of any casualties arising from the blaze which was spotted at about 8.40am

Eyewitness footage captures smoke rising from a fire at the Port of Cork. Video: @yaycork/Reuters 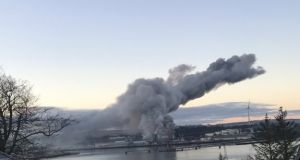 A fire at a grain storage facility in Cork Harbour has been brought under control and firefighters are continuing to monitor the situation.

The Port of Cork confirmed just before 11am that a fire at the R & H Hall grain storage facility at the deepwater berth at Ringaskiddy was now under control.

It said it had received no reports of any casualties arising from the blaze which was spotted around 8.40am.

In a statement R & H Hall thanked emergency services and the Port of Cork. team for their quick response and ongoing management of the incident.

“We would also like to apologise to local residents, neighbouring businesses and our customers for any inconvenience caused by the incident,” it said after local residents were advised to keep all doors and windows closed and remain indoors. Saturday morning’s fire sent huge clouds of dark smoke rising high over Ringaskiddy that were visible all around Cork Harbour.

Firefighters remained the scene to monitor the situation but all ship operations in Ringaskiddy were suspended as a precaution .

Earlier a major emergency plan was activated by the port company as firefighters battled the blaze .

We’re receiving multiple reports of a large fire in the Ringaskiddy area this morning. Take extreme care in the area as smoke will impede visibility. pic.twitter.com/SYJ9oT5WLx

A fire has broken out at the R&H Hall grain store on the Ringaskiddy Deepwater Berth. Emergency Services are on site and the Port Emergency Plan has been activated. Local residents are advised to keep all doors and windows closed and remain indoors.

In a statement the Port of Cork said the fire was “ under control and there are no reports of any casualties.Emergency services remain on site to monitor the area. As a precaution, all ship operations in Ringaskiddy have been suspended until further notice”.

The alarm was raised at 8.43am and three units of the Cork County Fire Service from Crosshaven, Carrigaline and Midleton responded and sped to the scene.

According to a spokeswoman for the Port of Cork, the company initiated its major emergency plan as they assess the fire and the risk it poses.

“The fire service is obviously taking the lead and we would be working closely with them in terms of assessing the risk that the fire poses in the area.

“So we will be looking to see if any of the other companies or properties close to the site of the fire needs to be evacuated, depending on the risk it poses.”

The Port of Cork emergency plan also involves assessing whether the fire poses a risk to shipping and other activities in the terminal area in Ringaskiddy.

The Port of Cork is currently finalising the development of an €80 million new container terminal at a 13. 5 hectare site in Ringaskiddy in the lower harbour.

There are a number of pharma firms in the Ringaskiddy area but it is not believed any have had to be evacuated as the fire is currently contained.

It is understood the R & H Hall building is quite large and is used to store animal feeds but it is not thought to involve huge staff numbers on site.

Ringaskiddy was the scene of a huge fire over 25 years ago when an explosion at the Hicksons Chemical plant led to a major emergency operation.

Pressure built up in a vessel at the plant on August 5th 1993, causing it to explode but fortunately no one was seriously injured in the incident.

Two staff suffered minor injuries in the explosion and ensuing fire but millions of euros worth of damage was caused and the plant closed for a period.