Ireland and the Netherlands to stand firm on EU tax policy 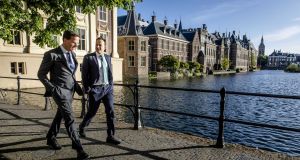 Taoiseach Leo Varadkar and Dutch prime minister Mark Rutte walk along the parliament in The Hague, Netherlands, prior to the Summit in Sibiu. Photograph: EPA

Ireland and the Netherlands intend to stand firm on the issue of tax sovereignty, Taoiseach Leo Varadkar has said.

Both countries have been criticised by other member states for their taxation policies, but Mr Varadkar told a joint press conference with the Dutch prime minister Mark Rutte that they were united on the issue of tax.

The two leaders met in The Hague ahead of this weekend’s EU leaders’ summit in Sibiu in Romania which will discuss the union’s strategic agenda for the next five years.

Mr Varadkar said both countries “strongly believe that tax is a sovereign issue, that individual member states should decide for themselves”.

He said the OECD was making “good progress” in bringing forward a global strategy for dealing with major companies.

“We also appreciate that we can’t have a world where very large corporations and very wealthy companies avoid paying tax anywhere. That’s why we strongly support a global solution to some of those issues,” he said.

The Taoiseach reiterated his support for the controversial €3 billion national broadband plan though he admitted it was a “leap of faith”.

He said he was glad he was in a government where senior officials could publicly descent about a decision taken by the cabinet.

“Robert Watt is a public servant I have worked with for many years. I have immense respect for him,” he said.

“I don’t think I would like to be in a government where everybody agrees and officials don’t raise concerns.

Mr Vardakar reiterated that the €3 billion plan had to be seen in the context of the €8 billion spent on the motorway network, and the projected €4-€5 billion cost of the Dublin Metro.

“Finding €3 billion over 25 years to connect every home and business in rural Ireland is a very good investment. It’s a leap of faith in believing in the future of rural Ireland.

“What are the alternatives? In the real world it is very hard to find ideal solutions. Nobody was able to develop alternatives. It was a choice between going ahead with this plan that will deliver for rural Ireland or deciding that we would never be able to do it. In my mind that would be the wrong solution.”

The pair also discussed Brexit. Mr Rutte said the “ball was in the UK’s courts” as regards Brexit and both leaders hoped that the Conservative and Labour parties could reach an agreement on the way forward for Brexit.

Mr Varadkar also revealed that the Dutch king Willem-Alexander and his wife Queen Máxima will visit Ireland in June.