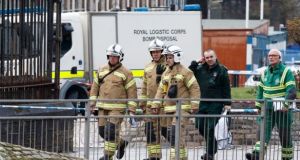 The group claims it posted five devices to addresses in Britain, however only four have been discovered. Photograph. Robert Perry/EPA

A group calling itself the IRA has claimed responsibility for the incendiary devices sent to three London transport hubs and a Glasgow university last week.

It also claimed a total of five devices were sent and now a search is underway for the claimed fifth, and unaccounted for, device.

Minister for Justice Charlie Flanagan said he was “deeply concerned” that Irish paramilitaries claimed they were behind the attacks.

“This was a reckless and cowardly attack on the entire community. I condemn in the strongest possible terms the people who carried out this act,” he said.

“We must work together to reject those isolated groups who would discard the accomplishments of the peace process for all communities on these islands for their own narrow objectives. Their futile agenda will not succeed.

“I spoke to the Home Secretary yesterday and conveyed my utter disgust at these actions. They are the actions of those who are without any vision for a peaceful future on Northern Ireland.

“I also reaffirmed to the Home Secretary our deep commitment to working closely with our colleagues in Northern Ireland and the United Kingdom. ”

It was always suspected the devices had come from Ireland and were the work of dissidents as there were Irish stamps and post marks on the parcels and such devices had been used by paramilitaries in the past.

The London Metropolitan Police has confirmed a call, during which a recognised dissident republican codeword was used, was made to a newspaper on Monday.

The caller to the Irish News in Belfast claimed responsibility for the three devices on behalf of the IRA.

Following that call, the London Met has also said the devices were similar to others used by dissidents in the past.

However, while it had been actively exploring dissidents as suspects for the attacks before the call of responsibility, it would also keep an open mind on other lines of inquiry.

“The claim was received on Monday, March 11th, by a media outlet in Northern Ireland using a recognised codeword. The claim was allegedly made on behalf of the ‘IRA’,” the London Met said.

“The investigations into these devices continue and relevant enquiries are being made in relation to the claim that has been made.

“Given the packages received last week bore similarities to devices sent in the past which were linked to dissident groups associated with Northern Ireland-related terrorism, officers were already looking at this as a line of enquiry. However, we continue to keep an open mind and enquiries continue.

“We are also aware that those claiming responsibility have indicated five devices were sent. At this time, only four devices have been recovered.”

The London Met added it had already given extensive security advice around suspicious packages to the business community and others. And now this advice had been reiterated in light of the claim of responsibility suggesting one device has yet to be found.

The three small devices found on Tuesday in London appeared designed to catch fire rather than explode. They were sent to Waterloo rail station and buildings on the Heathrow and London City airport campuses.

The package sent to the Compass Centre offices at Heathrow was opened, causing the A4 envelope the device was in to catch fire. However, the other two London packages were not opened.

The following day, last Wednesday, at Glasgow University in Scotland buildings were evacuated after a device, which was immediately directly linked to three devices in London, was discovered in the college’s mail room. It was not opened and there were no injuries.

Dissident republicans and the Provisional IRA before them have used explosive and incendiary devices to cause damage and disruption for years. Gardaí and the UK authorities immediately suspected last week’s attacks were the work of the New IRA.