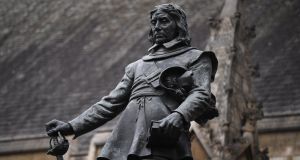 The statue of Oliver Cromwell at the Houses of Parliament in London. Photograph: EPA/NEIL HALL

Oxford’s vice-chancellor has invoked the name of Oliver Cromwell in an attempt to retain the controversial Cecil Rhodes statue at the college.

Prof Louise Richardson – who is originally from Tramore, Co Waterford – said memorials were part of our understanding of history.

Campaigners have sought for years to remove the statue of Cecil Rhodes from outside Oriel College. Rhodes was an imperialist and diamond magnate based in modern-day South Africa who left a huge amount of money to Oxford in his will. Rhodesia, now Zimbabwe, was named after him.

“I grew up in Ireland where Oliver Cromwell to me was what Voldemort [the Harry Potter villain] is to my children. And yet a statue of Cromwell stands outside Westminster. Does that mean it should be taken down? No.

However, Prof Richardson’s attempts to invoke the name of Nelson Mandela in the statue row has angered many of the university’s academics.

Asked whether Mandela would have opposed the Rhodes Must Fall campaign, Prof Richardson said: “I think he was a man of deep nuance who recognised complex problems for what they were. And I don’t think he sought simplistic solutions to complex problems.”

In a response published in the Daily Telegraph, the academics accused Prof Richardson of “inappropriate ventriloquising” of the late South African leader.

“It is especially so now, when universities need to listen to, not presume to speak for, black students and people of colour.

“Secondly, she claims that the campaign amounts to ’hiding our history’. The opposite is true. What is being demanded is a full and frank accounting for Britain’s history, in place of the selective commemoration of ’great men’ whose wealth was made through white supremacy.”

Prof Richardson’s intervention has not stopped the governing body of Oriel College voting to remove the statue of Cecil Rhodes.

The college said it had “expressed their wish to remove the statue of Cecil Rhodes and the King Edward Street Plaque”. It will need the permission of the city authorities to do so.

British prime minister Boris Johnson has indicated the statue of Cromwell at the Palaces of Westminster will not be removed.

In a post on his Facebook page, Mr Johnson said statues were a reminder of the nuances of history and that we should not judge historical characters by contemporary standards.

“Where will it end? Are we supposed to haul down Cromwell who killed so many thousands of people in Ireland?”

The town of Cromwell in New Zealand is also engaged in a debate over its name.

Cromwell resident Ben Deegan, who has Irish roots, told local media that places like Cromwell should be renamed.

‘’The name itself is a monument to someone responsible for thousands of deaths, with no bearing on anything here in New Zealand. We are all living on indigenous land, and we should both embrace and respect that.”

New Zealand, which removed the statue of Sir John Hamilton from the centre of the town named after him, is engaged in part of a worldwide debate about the removal of colonial-era statues and the renaming of towns and cities.