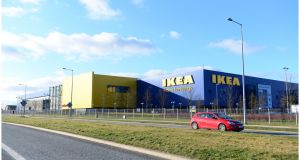 Ikea said there was only one bus stop located west of the Ballymun store, which was used for both incoming and outgoing buses. Photograph: Bryan O’Brien

In its submission to the National Transport Authority (NTA) in relation to plans to redesign the capital’s bus network, Ikea Ireland said the earliest bus available to workers on weekdays gets them to its store in Ballymun, north Dublin for 8am “or just after”.

“Given we have early shifts in store, an option for buses to arrive from 6am would be welcomed,” it said.

“Similarly for weekends, it is not currently possible for co-workers to arrive in time for a morning shift starting at 8am or 9am if they use bus services.”

Ikea employs more than 700 workers at its Ballymun store and its order and collection point in Carrickmines.

The BusConnects project aims to overhaul the current bus system in the Dublin region by redesigning the network and building 16 core bus corridors and segregated cycle lanes into the city.

Ikea made a submission to the NTA last September in relation to the redesign of the network.

A spokeswoman for Ikea said the submission asked for the redesign to “consider the existing bus stop location, community linkages, the provision of earlier bus times, a real-time information service and clear signage” in order to support workers and customers.

In its submission, Ikea said current public transport accessibility to and from the Ballymun store was “relatively poor”, with only one bus service (the 140) running directly to and from the store.

“Although a second bus service serves the nearby residential area to the south of St Margaret’s Road, there is a distinct lack of signage between the bus stop and the store,” it said.

Ikea said there was only one bus stop located west of the store, which was used for both incoming and outgoing buses.

“The provision of two separate bus stops would aid users in planning their trips and reduce confusion,” it said.

The retailer also said the Dublin Bus real-time information app had only one stop set up for the store “meaning it shows buses arriving and leaving Ikea on the same stop number”.

“It is therefore impossible to know if the bus is coming or going, presenting difficulties for users in planning their trip,” it said.

Ikea said electronic boards with real-time information on bus departure times could be installed in the entrance and exit halls of the store.

The retailer also said it welcomed the introduction of an “enhanced bus network with greater frequency of services and improved interconnectivity across the city”.

Some 30,000 submissions were received by the NTA in relation to the redesign of the bus network last September. A revised network is due to be published by mid-2019.

Separately, the NTA has published 10 of the 16 proposed core bus corridors. Details of the remaining six corridors are expected to be released later this month.