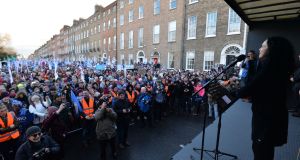 Nurses and midwives have expressed both relief and frustration following Monday night’s proposed agreement between the Government and nurses’ union averting strike action this week.

The proposed agreement, brokered by the Labour Court, must be voted on by 40,000 nurses. If the deal is approved some 26,000 nurses and midwives will receive €1,200 on average in additional payments.

While the main points of the proposal were leaked to the media on Monday, nurses and midwives have not yet received a breakdown from the Irish Nurses and Midwives Organisation of the details. Many expressed frustration that the media were disseminating mixes messages as to how nurses would benefit from the proposed deal.

Geraldine Talty, a clinical nurse manager from Portiuncula Hospital in Ballinasloe, Co Galway and a member of the hospital’s strike committee, said based on the information she had received, the proposal would deliver on the retention and recruitment of staff. “It says the Government does now commit to funding the framework on staffing. If that’s rolled out nationally in an efficient and timely fashion it will tell us what every hospital requires.

She said wage parity and the enhanced nurse practice scale appeared to have been addressed in the proposal. “Personally I never expected to get parity of pay overnight, it was something we understood would come over a number of years rather than months.

“The feedback from nurses is we’re not sure what’s in it yet... it could mean very different things for staff nurses and midwives. We’re really waiting to see what the INMO tell us.”

Many nurses took to Twitter to express their concerns around the details of the proposal and how it would affect their personal circumstances.

Aine McCarthy, a student nurse, tweeted that she had been out on the picket every day “hoping that there will be some sort of hope for me to be able to stay in my country when I qualify... I’m hurt, disappointed and totally begrudging my career choice today. I love nursing, with all my heart, but I cannot continue to work in these conditions. These proposals are no incentive for me to stay, and I don’t think will do anything for the retention of our newly qualified”.

The nurse and midwife behind the Polly Molotov twitter account (NursepollyRgn) tweeted that she was appalled by what she had seen of the pay proposal and that nurses would “gain nothing”. She wrote that “looking at 2010 payscales, it is insulting to say the very least and we have been as per usual let down dreadfully, it’s an insult.”

Joan Hickey (@misspollyanna) tweeted that the pay proposal was “a pisser” and that she had been punished for remaining in Ireland as a nurse. “I would have been better off emigrating & paid better now too.”

Tara, @codebluenursey, who has been tweeting regularly throughout the strike action and negotiations, posted on Twitter that she had accepted a new role in a PICU (Paediatric Intensive Care Unit) as it was “too good of a deal” not to accept. “I really don’t want to leave. I really don’t,” she wrote in reply to another nurse. “My life is here. I just can’t afford to stay any longer. I’m burntout and yet I’m only newly qualified.”

Like many others on Twitter, Kate Lyons (@doodadayo) tweeted that she would wait for the information meeting and “hopefully clarification” before she voted on the proposal. “Very little for midwives to vote on from what I can see,” she writes. “Are we mentioned in the proposal at all??

Annette O’Connor (@Annette0266), who describes herself as a midwife for 30 years, tweeted that she has a daughter who is a 4th year intern nurse. “Still can’t see pay parity for here. Going to UCD post grad open day to look at physio with her next Wed. She loves nursing but knows the hard road ahead with poor pay and conditions.”

Kellie Sweeney (@KSweeneyPBP), a general nurse and People Before Profit candidate in the upcoming local elections, tweeted that the strike should “never have been suspended. This proposal is not going to solve the recruitment and retention issue and it certainly isn’t pay parity.”