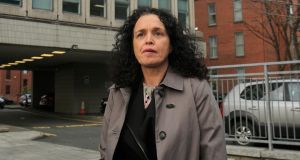 Phil Ni Sheaghdha INMO general secretary at a hearing in relation to the nurses dispute over pay and recruitment at the Labour Court, Dublin. Photo: Gareth Chaney Collins

There has been no immediate drive by public service groups for additional pay deals similar to that secured by nurses on Monday after their recent strikes.

Most public service trade unions were holding their counsel on Tuesday and indicating only that the implications of the new Labour Court recommendation, which brought about the suspension of the strike by over 40,000 nurses , were being studied.

A clearer picture on whether the Government will face a series of knock-on pay claims across the State sector is likely to emerge after the public service committee of the Irish Congress of Trade Unions - the umbrella body comprising most of the public service representative associations - meets in the coming days.

Some informed sources suggested that the areas in the Labour Court recommendation on nursing which will be paid closest attention by other unions are the proposals to revise arrangements put forward last September for dealing with the two-tier pay structure in place for those appointed since 2012 as well as the new proposals for the establishment of a new enhanced nurse salary scale.

The Government’s initiative announced last September to end the two-tier pay system involved permitting the staff concerned to skip two points on their incremental scales - points four and eight - so that they would “catch -up “ over time with more longer-serving colleagues.

However this proposal has been rejected by both the primary teachers’ union, INTO, and the union representing second level teachers, the ASTI.

Neither group have yet balloted members for industrial action on the issue. The

Labour Court recommendation changes this arrangement for some nurses.

It provides for nurses when they reach the fourth point of their pay scale to move to a new enhanced nurse/midwife practice scale if they meet certain criteria.

Moving to this new scale would see them receive about €2,500 more - although this would include some money they would have received anyway under the original Government two-tier pay initiative.

Sources said unions were likely to examine whether this new proposal would offer recent-entrant members more benefits than those set out in the original Government initiative last September. If they perceived this to be the case, some sources, said it was likely that unions would want the Government to match these benefits for their members.

Separately some informed sources said unions were likely to seek more details on the proposed new enhanced nurse practice scale to determine whether this involved the establishment of new higher-paid public service grade.

If they viewed this to be case, sources said that some unions would be likely to press for the establishment of similar new grades in their areas.

The country’s largest union, Siptu said on Tuesday that there would be consultation with its members in the health sector as well as other parts of the public service “on the implications of the Labour Court recommendation arising from the claims submitted by the nursing unions”.

Siptu deputy general secretary, John King said: “We have noted the statement by the Government that the proposals outlined in the Labour Court recommendation are consistent with the terms of the Public Service Stability Agreement. We will give careful consideration to the detail of the recommendation and will be consulting widely with our members in the health division and others across the public service in local government, education and state bodies. Siptu representatives will also be meeting with the public service committee of the Irish Congress of Trade Unions in the coming days to discuss the recommendation.”

In a brief statement the ASTI said it would “examine the Labour Court Recommendation and related ongoing developments carefully”.

The INTO said it would be looking at the Labour Court proposals.

The Teachers’ Union of Ireland president Seamus Lahart said the union would analyse the Labour Court recommendation in the context of its ongoing campaign to end pay discrimination and the severe difficulties schools are experiencing in employing teachers.

“Pay inequality has led to a crisis of teacher recruitment and retention in second level schools. The number applying for places on the Professional Master of Education (PME) - required to teach at second level - collapsed by over 50 per cent between 2011 and 2018.”

On Monday night the largestpublic service union, Fórsa,said it would “study the detail of the Labour Court recommendation regarding the nurses’ dispute, and any implications it may have for other civil and public service grades”.