‘If you apply for a driving test now, you might get one by June’ 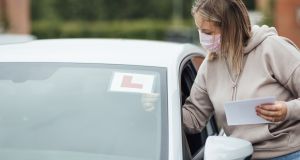 A major factor in the long lists of those waiting for driving tests is that some 45 per cent of all driving tests result in failure for the applicant. Photograph: iStock

It comes as waiting times for tests reach up to 30 weeks, amid a backlog of more than 80,000 applications.

The authority asked the Government for approval to recruit additional testers amid the Covid-19 crisis, but these have yet to be sanctioned. It has recruited retired testers, bringing numbers up to 130 across the State, but said more were needed.

When the test service was initially suspended in March due to coronavirus, the average waiting time for a driving test was less than six weeks. Testing centres reopened to car testing on July 29th and reached 75 per cent capacity by October.

Figures show there is now a queue of some 18,000 people who have been given a date for a driving test, and a backlog of some 46,000 applications who are yet to get a test date. An estimated further 20,000 applications have been made by potential drivers who are likely to be ineligible for a driving test, such as those who have applied before completing a theory test.

A major factor in the long lists of those waiting for driving tests is that some 45 per cent of all driving tests result in failure for the applicant.

Driving instructor Kathleen Comerford, who has published a series of video guides to passing the driving test, said the high failure rate was a major contributor to waiting lists because “nearly half of those who apply, fail and go right back into the lists”.

She said more effort needed to be put into passing the test first time, with more practical training by applicants with a qualified family member or friend. She also said the RSA should give greater emphasis to the need for applicants to get minimum numbers of hours of practical help between each of the mandatory 12 lessons.

“You would not expect to go out onto Croke Park with a hurley after 12 lessons. More effort needs to be put into passing first time,” she said.

A spokesman for the RSA said testers were working very hard in difficult conditions to get through the backlog, but he accepted that “anyone applying this week will have to wait 25-30 weeks”.

He said the new customer portal, to be known as MyRoadSafety, was a key step in the authority’s moves to streamline services.

“The ‘portal’ will also allow the customer to set their driving goal and see a clear journey map to achieve it. It will also include education and information to support customers in becoming safe licensed drivers,” he said.

To prepare for the move, the authority temporarily closed its existing driving test application system, but the authority said it expected the portal to be available at 2pm on Monday.