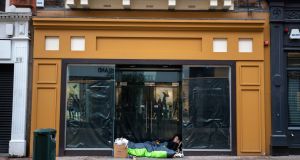 Closed shop on Grafton Street: Nphet argues if socialising and household mixing takes place, “a third wave of disease will ensue much more quickly and with greater mortality than the second”. Photograph: Tom Honan

The last few days have seen a slew of new information on Covid-19 come into the public domain.

In addition to an exhaustive, 36-page letter from the National Public Health Emergency Team (Nphet), the Government also published analysis by consultancy firm EY, the Central Statistics Office and the Department of Finance.

So what do we know now that we didn’t before?

We entered into this period “mid-table in Europe in terms of disease incidence”, Nphet told the Government in last week’s letter. However, due to restrictions, Ireland has radically outperformed the pack, avoiding the nightmare scenario of 2,600 cases and 40 deaths per day that had been predicted for early November.

This is unambiguously good news, but it is not unqualified. It is clear, for example, that Level 5 didn’t quite have the desired effect.

This is not to say it didn’t work at all – it did, in combination with the household visits ban. Nphet and the EY report both attribute declines in the level of disease to a combination of the two. But it has not worked as well as intended.

The hope was that the all-important R number, which gauges the speed of infection, could be brought to 0.5 for much of the lockdown period. That has not happened, and it is currently estimated at between 0.7-1.0.

Nphet now believe Level 5 will drive R down to between 0.6 and 0.9. The hope was to get cases under 100 per day – compared to the current 300 – and that may still happen, but it is unlikely they will remain suppressed for long.

Nphet argues that if socialising and household mixing takes place, “a third wave of disease will ensue much more quickly and with greater mortality than the second”.

This means that – having fired the most potent weapon we have for as long as the economy will tolerate it – we haven’t been able to suppress the disease to levels seen during the summer.

Other data may cause a reassessment of the extent and impact of restrictions. The Department of Finance presentation shows the hit to Ireland’s gross domestic product has been about the same as in other countries which have had less restrictive lockdowns, raising the question of whether we overcorrected, in narrowly economic terms. Meanwhile, the CSO analysis reveals the massive toll taken by lockdown on people’s mental health.

The EY report is heavily caveated, but it does suggest an upsurge followed the opening of wet pubs, and generally when people mixed in a variety of settings, from GAA championship celebrations to reopened universities.

All this must go into the mix when deciding pandemic policy in the future. A key question is when the next set of measures must be decided.

The Nphet letter says transmission can be brought under control with a three-week intervention when cases are at about 400 per day, and urges early intervention. It suggests that even in a controlled scenario where R is at 1.2, that threshold will be reached next month. The modelling is based on a starting point of fewer than 100 cases per day. However, Nphet believes R may rise as high as 2.0 during Christmas.

Previous modelling, released under Freedom of Information, shows the Government was told by Nphet it may have to intervene in early January if the R number was 0.5 during lockdown and if cases were about 100 per day when it was lifted.

Sunday’s number of 299 cases indicates that the journey to 100 may not be straightforward, or achieved at all, before cases begin to grow again. The Government will be hoping it has bought itself enough time before the next set of hard calls, which may be more complex and fraught than ever.