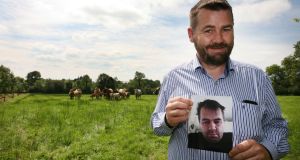 John Murphy with a photograph of himself taken before he started working on a social farm. Photograph Brian Farrell

John Murphy remembers a time when he wanted to end his own life. He had a “full mental breakdown”, he used to cut his arms, and he was committed to a psychiatric hospital after being diagnosed with post-traumatic stress disorder.

The Dubliner from Castleknock was referred to a social farm, and was so good at the work that Richard and Jackie Moran, who farm at Mountnugent, Co Monaghan, did not want to let him go when his placement ended, so he still works with them three days a week.

“If it wasn’t for social farming I would either be locked up in a [psychiatric] hospital or I would be six feet under,” he said.

His weight has dropped from 19½ stone to 14½ stone, he has halved his medication, and hopes to get off it completely. He says for the first time in his life he is doing something meaningful that he is good at.

“I used to take Ventolin inhaler maybe eight times a day but now I can run after cattle and I don’t need it at all – mind you, it is still a pain running after them,” he joked.

The 45-year-old says he does everything from dosing cattle to fencing. “It has changed my life. I used to have a drink problem but I don’t drink now. I had learning difficulties as a child, and no one ever trained me. I never had a job.

“ I was in a training centre and they had me putting tubes of toothpaste into boxes. Now I have something to look forward to, and I want to spread the message.”

He says that getting out in the fresh air, working with animals and having meaningful work has “changed my life”.