Ibrahim Halawa tells TDs of being beaten by prison authorities 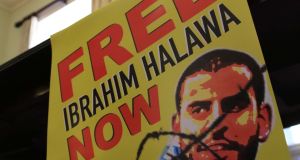 Poster from a press conference held by Lynn Boylan of Sinn Féin last August calling for the release of Ibrahim Halawa from jail in Egypt. Sinn Féin’s housing spokesman Eoin Ó Broin was one of the TDs who visited Mr Halawa on Tuesday. File photograph: Nick Bradshaw Somaia Halawa, sister of Ibrahim Halawa, holds up a card during a Dublin protest wishing him well at the time of his 21st birthday. He has been incarcerated in Egypt since the age of 17. File photograph: Getty Images

Ibrahim Halawa has told a delegation of TDs who visited him in an Egyptian prison on Tuesday that he was beaten and put in solitary confinement by the prison authorities.

The eight TDs, representing all the main parties, met the 21-year-old Dublin man for 90 minutes on Tuesday at a prison near Cairo. Ireland’s ambassador to Egypt, Damien Cole, as well as the prison governor and security staff, were also present.

Mr Halawa, from Firhouse in Dublin, has been in prison since August 2013, when he was arrested at the Al Fateh grand mosque in Cairo during protests against the ousting of then president Mohamed Morsi.

He and 493 others have been put on mass trial, but the proceedings have been repeatedly adjourned and no evidence has yet been heard.

At the meeting on Tuesday, Mr Halawa insisted he was innocent and appealed to be allowed to return to Ireland. He told the delegation that at times he refused prison food out of a sense of desperation.

“We had a lengthy, detailed conversation about his case and his conditions in prison,” Green Party leader Eamon Ryan said. “Ibrahim didn’t spare anything. He was really honest, really upfront.

“He made a strong, simple case: he is not a member of the Muslim Brotherhood, he didn’t engage in any violent crime. Okay, he expressed an opinion, he was engaged in a political protest, but that’s no reason to hold someone for three and a half years. He wants to get home.”

The eight-man Dáil delegation, which includes Ceann Comhairle Seán Ó Fearghaíl, is also due to meet Egyptian government ministers and officials to discuss the Halawa case and the wider bilateral relationship between the two countries.

On his conditions in prison, Mr Halawa told the delegation he had been beaten, dragged and on occasion put in solitary confinement for complaining about his situation, according to Mr Ryan.

“He is concerned about his own health. He has been on-and-off not taking food. We made a very strong case for him to end any such hunger strike and to keep his health and strength.”

In a series of tweets after the meeting, Paul Murphy TD, of the Anti-Austerity Alliance, said Mr Halawa was on hunger strike. “He fainted yesterday as a result of low blood sugar and received a glucose injection,” Mr Murphy wrote.

Mr Halawa told the delegation of cramped living conditions, with a large number of prisoners sharing a cell with barely enough room for a bed and a single shared toilet.

According to Mr Murphy, Mr Halawa said that in a different prison he was tortured, hit with metal bars and cut with metal chains.

Before leaving for Egypt, Mr Ó Fearghaíl said while Ireland wanted strong bilateral ties with Cairo, the Egyptian side would not be left in doubt as to the importance Ireland attached to Mr Halawa’s situation.

He said the “full fruition” of relations between Ireland and Egypt depended on a “satisfactory outcome” in the case.

The mass trial is scheduled to return to court on January 17th - the 18th court date in three and a half years.

At the last hearing, in December, Mr Halawa personally addressed the three judges, protesting his innocence and asking to be returned home to Ireland.