Ibrahim Halawa: 'Jail in Egypt has damaged my health' 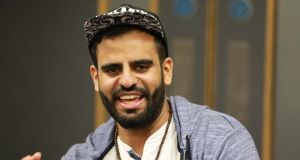 Ibrahim Halawa said he did not expect the support from Ireland to be “as big or as heartwarming as it was”. Photograph: Nick Bradshaw

Ibrahim Halawa, the Dublin man held in Egypt for over four years before being acquitted and freed to return to Ireland, has spoken of the damage to his health caused by his incarceration.

He said he is being treated for a heart condition and still suffers stomach pains after four years of maltreatment in prison in Egypt.

He also told The Pat Kenny Show on Newstalk radio that he had been disappointed by the behaviour of many people whom he had once considered friends since his return to Dublin last October.

It had been very tough physically and psychologically to go through what he had experienced, he said. It was also distressing to have people say he looked too well when he was released so he must not have been badly treated.

“I didn’t tear up my passport as some people claimed. Just ask the ambassador, he knows where my passport is.”

Mr Halawa was arrested in Cairo in August 2013 during a police crackdown on demonstrations against the overthrow of the elected president, Mohamed Morsi of the Muslim Brotherhood. He was detained with three of his sisters, Omaima, Somaia and Fatima, who were also tried (in abstentia) and aqcuited.

The 21-year-old told of how “surreal” it was to be home. “It still feels like it happened to another person. How did I go through that?”

He told of how he feared he would be executed “24/7” and that there was no respect of human rights within the nine prisons in which he was incarcerated.

“I was tortured, beaten and treated very badly. Every time I needed something I went on hunger strike. I set the highest demand, which was to go home and then asked to make conditions better.”

Mr Halawa said in the beginning he had thought he would be released within days, then weeks and months. But towards the end he feared he would never be released and would die in prison.

He did not expect the support from Ireland to be “as big or as heartwarming as it was”.

He was adamant that he is not, nor was he, a member of the Muslim Brotherhood. While in Cairo three of his friends died – two were killed during protests while the third died while he was in prison.

“I always said I was opposed to the killing of innocent people. I said they should use the ballot box to bring about change.”