Airport shows small and steady signs of a return to normality 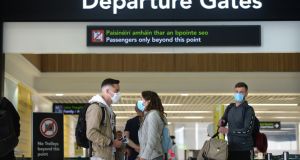 Dublin Airport’s Terminal One began to show the first signs of a return to normal on Wednesday, with queues, passengers struggling to work the Ryanair self-check in kiosks, and hair pulling over missed flights.

When the country went into lockdown in March the airport was like a ghost town, with only a tiny number of repatriation flights arriving to bring Irish citizens home from abroad.

At 9am on Wednesday there was a small but steady trickle through the departure gates, with flights heading off to Malaga, La Rochelle, Alicante, Amsterdam, and Toulouse.

Luke Parnell from Ballyfermot, Dublin, was part of a group of young lads heading to Amsterdam for three days. The 26-year-old said he was sick of being “locked up the last four months” and as other restrictions eased he decided to “just get on it” and book a holiday.

Mr Parnell and two others missed their flight on Wednesday morning and had to book a second one in the airport.

None of the three were wearing face masks, and Mr Parnell said he had two masks but had lost them. “I’ll be renting out my pushbike and that’ll be it. I’m mad into my sightseeing and my cycling, you know what I mean,” he said.

Alan Hill, his partner and their two young children Johnny and Hannah were catching a flight to Toulouse, France.

From Lisburn, Northern Ireland, the family will be in France for 12 days, and were “pretty excited to get on a holiday,” he said.

“I wouldn’t fly if I didn’t think it was safe, the airlines and the airport will do their best to keep it as safe as they can,” he said.

Working in retail during the pandemic Mr Hill said he was “ready for a break.” The two young children had been at home for the past four months, “so they’re ready for a change of scenery,” he said.

There are 960 hand sanitiser dispensers in the airport, 620 flexiglass screens at touch points, and 10,000 pieces of signage and regular announcements advising people to adhere to social distancing guidelines.

Paul O’Kane, head of communications for the DAA, said 4,000 passengers came through Dublin Airport on Monday, between departures and arrivals. This would compare to 116,000 passengers on the same day last year.

“There has been an increase in flights today, you’ve seen Ryanair add a significant number of new services today . . . but the numbers are still going to be very very low,” he said.

“Aviation always recovers, it recovered after 9/11, after Sars, after the oil crisis in the 70s, after the last recession,” he said.

“If someone decides that they do want to travel we’re going to make their journey as smooth as we can and protect them at every step of the way,” he said.

Dr Tony Holohan, the State’s chief medical officer, has warned of the risk of foreign travel importing new Covid-19 cases into Ireland. He has advised people who have booked overseas trips to not travel at present, due to the risk to themselves, their families and wider society.

Many of those making their way through departures were on flights from Britain connecting through Dublin, and immigrants travelling home for the first time in months.

Paola Invernizzi (28) was flying to Milan to visit her family who she has not seen in 11 months.

“I’m living in Dublin since less than two years . . . I was planning to go [HOME]in February,” she said.

“Of course it is a difficult situation, where I fly it is a little bit dangerous because everything started there,” she said.

Her family live in Ivrea, a small town outside of Milan, which has no known Covid-19 cases, and she will return to Ireland in six weeks, she said.

One deflated group of four young people travelling home to America missed their connecting flight by five minutes. Sitting in a corner of the airport among a pile of suitcases making frantic phone calls to rearrange their journey home, they painted a familiar scene of frustration as old as air travel itself.