‘A beautiful soul with a beautiful mind’: Funeral of Noah Donohoe takes place

Mother’s words when boy’s body found: ‘He poured a lifetime of love into my life in 14 years’

People line the Antrim Road as the hearse bearing Noah Donohoe’s coffin is brought to his school, St Malachy’s College. The funeral of the 14-year-old took place at St Patrick’s Church in central Belfast on Wednesday. Video: Freya McClements 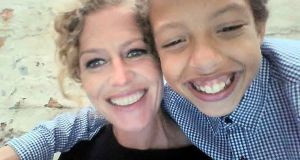 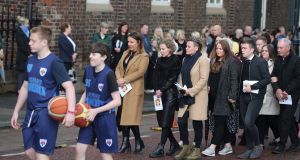 Fiona Donohoe, the mother of Noah Donohoe, follows his coffin as it is carried into Saint Patrick’s Church in Belfast. Photograph: PA 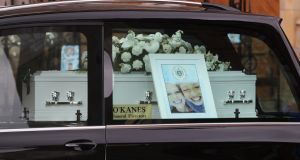 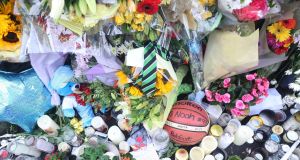 Noah Donohue was an “inspiration” who was “full of the joy of living”, mourners at his funeral in Belfast have been told.

“So much has been written and said about Noah that has touched the hearts of everyone in this city,” Fr Michael McGinnity said.

But the words that had stayed with him, he said, were those of Noah’s mother, Fiona, the day after her son’s body was found.

“She said: ‘I have been so blessed. Noah was a beautiful soul with a beautiful mind. He poured a whole lifetime of love into my life in 14 short years’.”

The funeral of the 14-year-old took place at St Patrick’s Church in Donegall Street in central Belfast on Wednesday morning.

Due to the coronavirus restrictions, Requiem Mass was restricted to a small number of friends and family only, but more mourners gathered outside the church to pay their respects ahead of the service.

A bunch of flowers was fixed to the church railings, along with posters bearing the teenager’s picture and the words “Rest in Peace Noah”.

The hearse was escorted by a guard of honour led by members of his former basketball team, Belfast Phoenix, and by school friends wearing their St Malachy’s College uniforms.

Members of the community search-and-rescue team who had helped to look for Noah stood outside the church during Mass.

In his introduction to the funeral, Fr McGinnity acknowledged the “countless people” holding the Donohoe family in their thoughts and prayers, and the “tangible sense of shock and disbelief has gripped the community” since Noah’s body was found.

“So many people are consumed by a sadness that cannot be put into words,” he said, adding Noah’s family were grateful to all those who had reached out to them in their hour of need, including local people and community rescue teams, the police and all those at St Malachy’s College, as well as his friends. “We remember them with gratitude today,” he said.

Noah’s body was found in a storm drain in north Belfast on Saturday, six days after he went missing.

Noah had cycled across the city to the Northwood Road area of north Belfast, where he was last seen just after 6pm on Saturday, June 21st. Much remains unclear about his final movements, but police believe he may have fallen off his bicycle and hit his head.

He was then seen discarding his clothing and cycling naked, actions that police and his family said were “completely out of character”.

The Police Service of Northern Ireland said on Saturday there was “no evidence to suggest foul play”.

Fr McGinnity, who is the priest at the Donohoe family’s home parish of St Malachy’s in central Belfast, had been asked to celebrate Requiem Mass at St Patrick’s by the family.

Noah and his mother had a personal connection with the church, which was, Fr McGinnity said during his homily, their “spiritual home”.

It was at St Patrick’s, he said, where “they were often drawn to pray before the image of Mary our mother as depicted in the beautiful triptych of the Madonna of the Lakes down on the right hand side of the church.

“It was here, in this church that Fiona taught Noah as a child to thank God for his life and to remember that he, like every child, has been sent into the world to share God’s love with everyone.”

Fr McGinnity said that Noah had “a sense of wonder” and a “natural curiosity” about life.

“Every day he wanted to know more about the world and his place in it.

“Noah was the kind of boy who was just full of the joy of living. Whether he was on the basketball court or playing his cello, or just having fun with friends, he savoured every moment.

“He was passionate about everything he turned his hand to, and he wanted everyone to share that passion with him.”

One of Noah’s close friends, Fr McGinnity said, had described him as someone with “so much potential in everything he did”.

What had endeared him to his friends, he said, was that he “carried that potential so lightly and so humbly.

“As a natural leader he wanted everyone to appreciate their own gifts and talents. More than that, he wanted them to find the joy in living that he had found.

During Requiem Mass, a prayer service was held by Noah’s form class at St Malachy’s College. After the funeral, the hearse left the church escorted by motorbike driven by volunteers from the Community Rescue Service, who had helped in the search for Noah.

Several thousand people lined the streets from St Patrick’s church to Noah’s school, St Malachy’s, on the Antrim Road in north Belfast, applauding as the hearse passed. Some people released balloons, and others laid white roses on the pavement in tribute.

Many gathered outside the gates of St Malachy’s College, where flowers, candles and messages of tribute have been left.

The cortège made a special detour into the school grounds allow students and staff to pay their respects. As it approached the college, healthcare workers from a nearby nursing home were among those who came onto the street to applaud; St Malachy’s students and members of the Peace Players cross-community basketball team formed a guard of honour along the street.

Sean McCarry, the regional commander with the Community Rescue Service, said he had been “totally overwhelmed” by the reaction of local people.

The whole community, he said, had taken the search for Noah to their hearts, and this allowed them to display “an outpouring of their feelings” towards him and his family.

Some of those who gathered were wearing masks, but the majority were not, and social distancing was not always observed. Mr McCarry said police and their volunteers had followed social distancing guidelines, and the public had heeded their requests to social distance when asked and had dispersed quickly.

Earlier this week, the family said that “sadly” the Mass would be private because of the Covid-19 restrictions.