‘I’ve come out of prison a very damaged person’

After his release from the Old Bailey in 1989, Gerry Conlon spoke to just two journalists 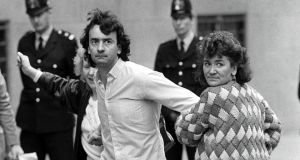 Gerry Conlon, one of four people wrongly convicted for a bombing in Guildford, England, is accompanied by his sisters after his release from the Old Bailey, London, in October 1989. Photograph: Peter Thursfield

The call came early in the morning of Friday, October 20th, 1989, less than 24 hours after his dramatic and defiant exit from the Old Bailey, flanked by his two sisters, to the waiting media and hundreds of cheering building workers working on a major construction site across the street. Gerry Conlon would give an interview to me and to the Guardian journalist David Pallister.

The previous day he was the only one of the Guildford Four to emerge from the court following the short hearing which led to their release after 15 years in jail. Paul Hill had been immediately re-arrested and taken to Belfast for a bail hearing in connection with his successful appeal against an earlier separate conviction. The other two members of the unlikely foursome of bombers, Carole Richardson and Paddy Armstrong, had suffered nervous breakdowns in prison, could not face the crowds and were taken quietly away.

I had slipped out of the courtroom after the hearing and gone downstairs, where a small group, including his tireless solicitor, Gareth Peirce, was waiting. A door opened and Gerry Conlon emerged. He recognised us and embraced us before heading for the door. And so it was that I was immediately behind him when he left the court, his sisters clinging to his arms, proclaiming: “I’m an innocent man, I shouldn’t have been in jail.”

He embraced us when he met us and said: “If I talk at all I want it to be in papers like the Guardian and The Irish Times that supported us. We were not a good story a few years ago and no one wanted to know us.”

He was very animated and intense, speaking with passion of his father’s death in prison and Guiseppe’s final words to him, urging him not to get involved in confrontations with the prison warders, and of other prisoners serving sentences for crimes they did not commit. At one point his voice trailed off as he said: “I keep thinking about the Birmingham Six.” They were to wait another 18 months for their release.

In that interview he spoke vividly and at length about the beatings and intimidation that led to him making a statement admitting the Guildford bombing. His first statements were torn up “because they were the truth”. He eventually signed a confession statement because the police threatened to have his mother and sister killed, he said. But he still had faith in British justice – he thought the statement was so ridiculous it would be thrown out by the court.

After his release he continued to campaign against miscarriages of justice, but the years in jail had taken their toll on his physical and mental health. That Friday morning in 1989 he told The Irish Times: “I’ve come out of prison a very damaged person. I need a bit of counselling.”

It was not enough, and he died at the too young age of 60.