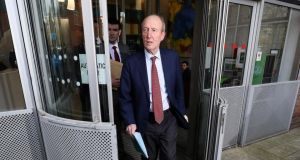 Minister of Sport Shane Ross: ‘We have had very dark days in recent times. Some days I thought we would never get to where we are now.’ Photograph: Brian Lawless/PA

Minister for Sport Shane Ross has promised a “new milestone and a new dawn” for Irish football after a rescue package worth more than €30 million was agreed in exchange for far-reaching corporate governance reforms at the Football Association of Ireland.

Speaking yesterday after a cabinet meeting to approve the State’s involvement in the rescue package, Mr Ross said: “Today marks a new milestone and a new dawn for Irish football. We have had very dark days in recent times. Some days I thought we would never get to where we are now.”

Gary Owens, the interim chief executive of the FAI, said it was a “hugely important day for staff”.

“We needed to regain public trust and with the key stakeholders to get them to continue to fund our sport. I’m confident we have the framework to move forward with confidence.”

The FAI’s chairman Roy Barrett said he had been struck by “the enthusiasm and the support that each of the stakeholders have brought to each of the discussions and the ultimate agreement”.

The deal heralds a likely end to the acute phase of the crisis at the FAI.

However, the association still faces multiple challenges if it is to recover from a year that saw sustained controversy, culminating in the revelation that the association has liabilities of €62 million.

Most immediately, the association must address the future of its employees.

All parties yesterday indicated that the threat of widespread redundancies at the association had receded.

However, one source that was involved in the refinancing negotiations said some staffing changes were inevitable. “The beast is too big,” the source said.

The FAI must also await the outcome of an investigation into its finances by the Office of the Director of Corporate Enforcement.

The findings of an earlier forensic audit have also been sent to the gardaí.

It must also enter talks with the League of Ireland clubs with a view to improving a relationship which had been widely seen as being neglected.

Meanwhile, it must find a new shirt sponsor as the association looks to shore up its finances and wider commercial performance.

The Government has committed to providing €19.2 million in new funding over the next four years, split between grants and a €7.6 million interest-free loan.

Supports from Uefa and Bank of Ireland are worth at least another €10 million, it is understood.

However, none of the parties present yesterday would be drawn on the precise detail of Uefa and Bank of Ireland’s contribution.

Minister of State Brendan Griffin said that there was “serious concern” during negotiations over the plan to host two Uefa 2020 games in Dublin this summer due to the FAI falling behind on its licence fee payments for use of the Aviva stadium.

He also said there was a risk that “contagion” could have affected the IRFU, which is part-owner of the stadium alongside the FAI.

New interim deputy chief executive Niall Quinn, a former Ireland striker, promised yesterday that “the power of football will come home and resonate far more loudly than the shadow that has cast itself over it over the last year”.