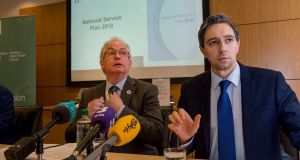 HSE director general Tony O’Brien and Minister for Health Simon Harris. Mr O’Brien advised the Minister at the end of November that there were already doubts that new value or money savings targets of €346m would be realised in full. Photograph: Brenda Fitzsimons

The HSE has privately warned the Government that it could face unprecedented financial shortfall of up to €881 million this year.

The Irish Times has learned that HSE director general Tony O’Brien advised Minister for Health Simon Harris at the end of November that there were already doubts that new value or money savings targets of €346 million – which were a key element of the health budget in 2018 – would be realised in full.

In addition, it has emerged other financial risks running to several hundred million euro were not included in the HSE national service plan, which was published a month ago, based on “Department of Health planning assumptions”.

These include dealing with the financial overrun arising from 2017, which legislation indicates should be a first charge on the HSE budget for this year. The HSE has privately estimated that this charge could reach €174 million. The issue is now to be addressed in the second quarter of this year once the health authority’s financial accounts are finalised.

The HSE has also warned privately that another unfunded area is an estimated €68 million which may arise as a result of pay awards this year. It is unclear as to whether this refers to the claim for pay restoration by thousands of staff in HSE-funded voluntary organisations where a strike is threatened from the middle of February.

It also warned of a potential €51 million financial challenge arising from assumptions relating to income from private patients.

New official correspondence also shows the HSE argued it would need close to €1.5 billion in additional funding this year to maintain existing levels of health services. This figure was strongly disputed by the Department of Health in the run up to the budget last autumn.

Mr O’Brien told the Minister the potential overall financial challenge facing the HSE was estimated at €881 million before cost-mitigation measures including the value-for-money savings and the areas covered by the Department of Health planning assumptions.

“This has significant implications for cash management and the allocation of budgets to accountable persons under the HSE’s performance and accountability framework.”

However, in the letter, Mr O’Brien expressed doubts about the prospect of the value-for-money savings being realised in full.

He described one tranche of these projected savings – valued at €77 million – as being “extremely challenging to deliver”, while another €150 million element of the overall target was referred to as “more long-term and strategic in nature” and having the highest level of delivery risk in 2018.

The Department of Health said at the weekend there would be no reduction in health services this year, and that service levels in 2018 would be “typically equal to or higher than planned or delivered in 2017”.

It also said there was funding provided for new developments and expanded levels of service across major areas.

“The figure of approximately €900 million referenced is simply the difference between the funding provided by Government in Budget 2018, and the amount requested by the HSE in their original submission.”

“The service plan sets out that a value improvement programme will be established by the HSE which will consider how to reduce the costs of delivering services without impacting negatively on either the level or quality of such services. The HSE has already commenced work on the programme.

“Within this overall programme the Department of Health is working with the HSE within a shared governance and oversight framework on a strategic value and productivity programme. This will be a multiyear strategic initiative, with the objective of identifying and implementing savings from areas such as productivity and improved models of care.”