Hospitality will not reopen before mid-summer, Taoiseach says 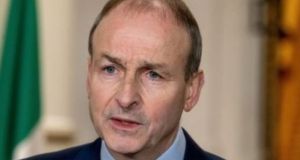 Taoiseach Micheál Martin has said he does not foresee pubs and restaurants being open again before mid-summer.

His comments came on Saturday before the National Public Health Emergency Team (Nphet) reported 26 deaths and 988 new cases of Covid-19.

In an interview with RTÉ Raidió na Gaeltachta, Mr Martin said the new coronavirus variants were of most concern to the Government and public health doctors, and because of that reopening the country would be very slow.

Asked about the reopening of hospitality, he said: “We don’t foresee that before the middle of the summer...what the public health authorities are saying is that we stick with this until end of April, then we reflect on the situation and make decisions about the months ahead.”

“There won’t be much of a change (after this phase) because the numbers are still too high...what we intend is to reopen schools gradually...it will be slow, we’ll be cautious, because we have to monitor the effect on the virus. The biggest challenge we face is new variants as they could impact the vaccines. It’s sensible to open slowly, as the vaccines are coming.”

Reacting to Mr Martin’s comments, Adrian Cummins, chief executive officer of the Restaurants Association of Ireland, said business supports must be increased for all restaurant and hospitality businesses.

The current level of supports would not keep the vast majority of businesses afloat until the summer, Mr Cummins warned.

“The Government now needs to increase the level of business supports for all hospitality businesses in order for the survival of the sector and remain ready to reemploy hundreds of thousands of tourism and hospitality workers currently on the PUP (pandemic unemployment payment),” he said.

Speaking there, Minister for Health Stephen Donnelly said Ireland had to accept it is lagging behind the UK when it comes to vaccinating people against Covid-19.

“People are very reasonably looking at the UK and saying, well, the UK are further ahead,” he told reporters. “And they are. We have to accept that, they are.”

Three cases of the Brazil Covid-19 variant (P1) have been identified in the State for the first time, Nphet said on Friday night.

All of the cases identified are directly associated with recent travel from Brazil.

The country has been recently designated as a category 2 and arrivals are required to quarantine at home for 14 days.

The Government’s revised Living with Covid plan is due to be published next week.

On An tSeachtain le Máirín Ní Ghadhra on Saturday, Mr Martin was also asked about the recent controversy over the European Commission’s hastily aborted plan to trigger Article 16 of the Northern Ireland protocol as part of a bid to control Covid-19 vaccine exports from the EU.

The DUP has subsequently expressed a desire not to engage in cross-Border activity related to the Northern Ireland protocol.

Mr Martin described the DUP’s stance as disappointing, and said politics must be put aside to find a practical resolution to any difficulties within the structure of the Withdrawal Agreement which followed Brexit.

He also said he was concerned at the increasing tension within unionism and loyalism on the matter.

“I’m sorry that the DUP has taken this stance that, I don’t think that’s the right way to deal with the question. After Christmas the DUP was happy to work with the Protocol on a practical level, although they didn’t agree with it.”

“We’re happy to work together with all parties to find a resolution to their concerns...There’s a committee where these matters can be discussed, and problems can be resolved, within the Northern Ireland protocol, and they should be used...

“A lot of work was done over several years on this, and it’s not even two months since January...I think the most effective way to deal with the questions are within the Agreement,” he said.

“As I said before, we need to dial down the rhetoric ...That type of politics is no good for anyone in my opinion. We all have an obligation to dial it down, to come together to discuss these questions...we have to put politics aside and deal with the issues within an economic, social and practical context.”