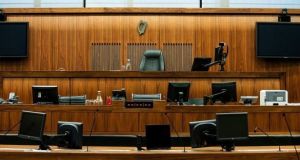 Detective Garda Fitzpatrick said the injured party had been in the East Wall area an hour before the incident, ‘where he sought a substance that turned out to be a rip off of a drug deal’. Photograph: Collins Courts.

A 30-year-old man suffered life threatening injuries in a mini riot in Dublin after he was ripped off in a drug deal and demanded a refund, a court has heard.

Investigating gardaí made three arrests on Friday in connection with the incident at Island Key apartments, East Wall, Dublin 3, on November 17th last. Footage of the scenes had been widely shared on social media.

Brandon Leech (21), of Teeling Way, Dublin 3, and two boys in their mid-teens, who cannot be named because they are minors, were detained at Store Street Garda station in the capital.

They were charged with violent disorder and held overnight pending their appearance before Judge Gerard Jones at Dublin District Court on Saturday.

Each case was dealt with separately with no Garda objections to bail provided the trio obeyed strict conditions.

Detective Garda Michelle Fitzpatrick gave evidence of arrest, charge and caution in the case of one of the boys, aged 15. She said he made no reply and he was handed a true copy of the charge.

Judge Jones asked for an outline of the allegations.

Detective Garda Fitzpatrick said the injured party had been in the East Wall area an hour before the incident, “where he sought a substance that turned out to be a rip off of a drug deal”.

“He returned an hour later looking for money back,” she said.

A violent disorder took place in which the man suffered life threatening injuries, the court heard. He was taken to the Mater Hospital and transferred to Beaumont. “There was information that he was going to pass away.”

However, he has since been discharged but has serious injuries, Detective Garda Fitzpatrick said.

The boy’s mother and another male relative were in court.

They disagreed with a proposed bail term restricting that boy’s movement, said Kevin McCrave BL. However, Judge Jones said they could visit him every day in custody in a detention centre over Christmas instead.

The 30-year-old man was lucky to survive the alleged violent attack, and it was a serious matter, Judge Jones said.

The teen would, however, be at liberty over Christmas if the bail term was accepted, he held.

The objection was dropped but could be raised again at the boy’s next hearing.

The second youth, also aged 15, made no reply when he was charged, said Garda Thomas McEvoy.

His solicitor Brian Keenan said his client, who was accompanied to court by family members, agreed to the conditions.

Releasing them on bail, Judge Jones ordered them all to stay out of Island Key area, in East Wall, to provide gardaí with contact phone numbers, obey 8pm – 6am curfews at their homes and not to associate with each other. The judge noted they did not live near the injured man.

Mr Leech must sign on every Monday, Wednesday and Friday at Store Street Garda station, but the two boys are are required to sign on just once weekly at the same station.

The teenagers were ordered to appear at the Children’s Court and Mr Leech must come back before the district court on dates in February.

They have not yet indicated how they will plead. Legal aid was granted.

The charge is for using or threatening to use violence at Island Quay, which can carry a maximum 10-year sentence.