Death rate for chronic obstructive pulmonary disease has increased by 12% 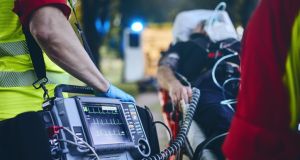 Patients are far less likely to die in hospital from heart attack, stroke or pneumonia than a decade ago, a new report shows.

In contrast, the death rate for chronic obstructive pulmonary disease (COPD), the most common disease responsible for emergency hospital admissions, has increased, according to the National Audit of Hospital Mortality for 2019.

The reduction for acute myocardial infarction is even greater, at 35 per cent, down from 72 deaths per 1,000 admission to 47.

In-hospital mortality for pneumonia dropped 27 per cent, from 142 deaths to 103 per 100,000 admissions, according to the report from the National Office of Clinical Audit (Noca).

An estimated 500,000 people in Ireland are living with COPD, yet it is estimated that only 200,000 of them have had a formal diagnosis.

Tallaght and Beaumont hospitals in Dublin also recorded high COPD mortality rates but were not considered outliers because this was a first occurrence.

For stroke, a 38 per cent fall in ischaemic stroke was recorded, though the rate increased slightly in 2019.

Noca said “statistical outliers” occurred in four individual diagnoses during 2019, and the relevant hospitals - Cork University Hospital and the Mater Hospital in Dublin - have conducted reviews of their data. There were no issues of concern raised in the reviews, it stated.

“The results demonstrate the improvements in outcomes for some of the most significant illnesses in our hospitals,” commented Dr Bridget Egan, clinical lead for the audit. I encourage all hospital to expand on their use of the National Audit of Hospital Mortality tool as it provides a great insight into these illnesses at individual hospital level.”

Noca says the report, which uses data from 44 hospitals, cannot be used to compare hospitals to one another.  “No two hospitals are expected to be the same, as hospitals have very different case mix or patient profiles.”

The Covid-19 pandemic impacted on the audit process by causing the implementation of recommendations in previous reports to be delayed.