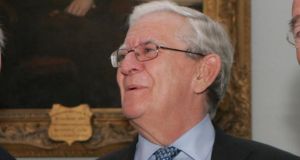 Veteran historian Professor Ronan Fanning has said violence worked in Ireland during the revolutionary period because of the “pusillanimous and inept behaviour of British governments”.

Responding to former taoiseach John Bruton’s belief that neither the Easter Rising or War of Independence were necessary, Prof Fanning said he was not a believer in “blood and iron”, but that was not the same as saying that violence does not work.

Speaking at a conference in the Royal Irish Academy (RIA) to mark the 100th anniversary of the Third Home Rule Bill achieving royal assent, he remarked: “We have to learn that British failures were responsible for violence and the triumph of violence in Ireland.”

He maintained that the Liberal government had never intended to enact the third Home Rule Bill as it was constituted and it was never implemented.

The British government had intended in 1912 that changes would be made to the bill as “fresh evidence of facts may render expedient”.

The bill was the “institutionalisation of the policy of wait and see” and Asquith was waiting for the reaction of Ulster Unionists and their supporters was an encouragement to sedition.

If the Home Rule parliament had been set up before the first World War there would probably not have been violence as the Irish Republican Brotherhood (IRB) would not have grounds for a revolution.

Professor Fanning said it was “extraordinarily poignant” the 100th anniversary of the royal assent for the Third Home Rule happened on the day Scotland was voting on independence. However, the differences between the Irish and Scottish experiences were “infinitely greater” than the similarities.

Irish voters were never given the same choice and, if they had been, they would have voted by an overwhelming majority for independence, he maintained.

Professor Fanning, author of the book Fatal Path, said British parliamentary democracy had “signally failed to work” and had betrayed the leader of the Irish Parliamentary Party John Redmond.

He said the number of Irishmen killed in the Easter Rising and War of Independence “paled into insignificance” in comparison with the number who died answering John Redmond’s Woodenbridge speech in which he urged Irish Volunteers to sign up to the British war effort. That call had been a mistake, he believed.

Redmond’s biographer Dermot Meleady said it was right that royal assent for the bill should be celebrated.

He said Home Rule was often denigrated to suggest it did not enjoy true democratic legitimacy, and that Redmond was a member of the British establishment, which he was not.

Had he been a member of the British establishment, he would not have made the “monumental mistake” of not taking up an offer of a place in the war cabinet in 1915, Mr Meleady told the conference.

“Portraying him as being out of touch with nationalist Ireland or being Britisised really is quite wide of the reality.”

Mr Meleady said Mr Redmond was “guilty of self-delusion” in believing the first World War would lead to a reconciliation between Unionists and Nationalists, but he was not the only one. Eoin McNeill and Padraig Pearse were similarly deluded.

The Easter Rising was not a rebellion against frustration that the Home Rule Bill had not been implemented. It was instigated by those who “despised the very idea of Home Rule”.

The anti-partition stance that the Irish Parliamentary Party was forced to adopt meant in reality that “freedom for Ireland meant the freedom to coerse Ulster”, and it took 70 years for nationalist Ireland to rid itself of that viewpoint.