Rate is proof Clancy Amendment had been necessary, Minister for Transport says 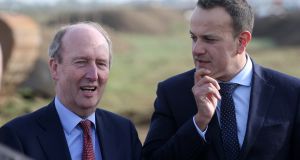 Minister for Transport Shane Ross has described as “disappointing” the high number of vehicles driven by unaccompanied learner drivers which were seized by Gardaí in the first 50 days of new legislation.

From December 22nd until February 10th gardaí seized almost eight cars per day on average - at total of 377 - from learner drivers who failed to obey the regulation requiring them to be accompanied by a driver who has held a licence for at least two years.

Mr Ross said the rate of seizure was proof the legislation had been necessary and he welcomed the fact that it was being properly enforced.

“But I suppose what it does do is it shows the need for this legislation and I’m very glad to see that it’s being properly enforced.”

He acceptedthe waiting list for driving tests was still too long but said the Road Safety Authority (RSA) was working to reduce the times.

“The waiting list is far too long. The RSA’s target is 10 weeks and it has been brought down considerably,” he said.

“It is now 12 weeks and they’ve recruited large numbers of extra driver testers in anticipation maybe of a bit of a bulge, a spike, because of the learner driver legislation,” he added.

It has been an offence carrying up to four penalty points and a fine of €120 for learners to drive unaccompanied for some time but gardaí acquired new powers last December allowing them to impound vehicles of learner drivers caught breaking the rule.

Under the Clancy Amendment motorists whose vehicles have been seized face court fines of up to €1,000 and release fees of €125 for the first day, and €35 for each additional day or part day.

Where the vehicle’s owner claims it was taken by the unaccompanied driver without permission, the gardaí may institute an additional prosecution for theft against the learner.

The amendment is named after mother and daughter Geraldine and Louise Clancy who were killed on December 22nd, 2015, when an unaccompanied learner driver lost control of her car in Co Cork.

Pubs not to reopen and restrictions to remain on all gatherings , Cabinet decides 18:44
Court approves €35,000 payment to family of infant who died hours after birth 18:36
Former TV presenter dies after car enters water in Co Down 18:02
Ireland needs to move to ‘zero-Covid’ policy to avoid catastrophe, scientists say 17:48
Coronavirus: 45 new cases but no further deaths reported in the State 17:46