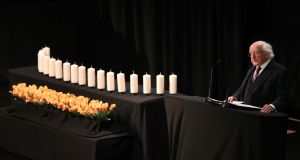 President Michael D Higgins said the intervention by Ronald Lauder created a sense of ‘discord’ in the tent at the Birkenau event. Photograph: Nick Bradshaw

President Michael D Higgins has criticised as “completely inappropriate” a claim by the World Jewish Conference (WJC) that the UN’s consistent criticism of Israel and its politics is disproportionate and anti-Semitic.

At Monday’s ceremony to mark the 75th anniversary of the liberation of Auschwitz, WJC president Ronald Lauder said that 81 per cent of UN resolutions criticising countries in the last seven years were directed at Israel.

The UN ignores dictators who kill their own people, Mr Lauder said, adding that “anti-Zionism is nothing but anti-Semitism”.

Mr Higgins said the intervention by Mr Lauder, the son of Hungarian Jewish emigrants to New York, created a sense of “discord” in the tent at the Birkenau event.

“It was completely inappropriate,” said Mr Higgins. “It was bad and a shame. You sensed, too, in the long row in front of me a certain frisson.”

On Tuesday Mr Higgins learned about Krakow’s Jewish life starting in Ghetto Heroes’ Square. An installation of bronze chairs remembers the ghetto erected by Nazi occupiers here in 1941, and from where Krakow’s Jews were deported to their deaths.

The centre is open for all, including Poles who learn as adults of their Jewish identity, hidden by their parents. This legacy of the communist era, said Rabbi Avi Baumol, makes it difficult to gauge the size of the Jewish community in Krakow.

“On the one hand, every day is Holocaust remembrance day here; on the other hand, we are working to build a future,” he told Mr Higgins in a meeting.

Home to Jews since the 11th century, Krakow’s prewar 64,000-strong community – a quarter of the city’s population – was almost entirely obliterated under the Nazis.

Jonathan Ornstein, executive director of the Jewish Community Centre, said it was counterintuitive for many to conceive of a renaissance of Jewish life in a city one hour east of Auschwitz. Yet in 2017 the first Jewish kindergarten to operate here since 1939 opened its doors and, with 20 children, is now full.

“This miracle is happening here, with Jews and non-Jews working together, which is all the more important at this difficult time,” said Mr Ornstein.

One of the most famous residents lived opposite the synagogue: a young woman who took her family’s face cream recipe and built it into an international cosmetic empire – Helena Rubenstein.

At every stop on his tour of Jewish Krakow, Mr Higgins bumped into Irish well-wishers including Northern Irish broadcaster Gerry Kelly, who was visiting as part of a birthday trip for his wife, Helena.

“You can read as much as you wish about Auschwitz,” said Kelly, “but being there will be something completely different.”