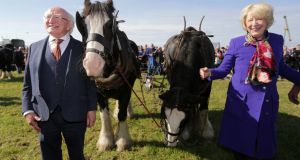 Potential presidential candidates will have to declare if they want to run against Michael D Higgins before he announces in 12 months whether he wants a second term.

Informed sources suggested that Mr Higgins’s plan may be to wait for potential rivals to publicly declare if they want to stand against him before showing his own hand.

It is now widely believed in political circles that Mr Higgins wants a second term in Áras an Uachtaráin.

He told RTÉ Radio’s Today with Sean O’Rourke yesterday that he will “make an announcement as to what my intentions are” after next summer, which would be just weeks out from a potential election that is due in October 2018.

During the 2011 campaign, Mr Higgins had said, “I’ll only be doing one term.” He repeated that pledge after he won the election.

Independent Senator Gerard Craughwell has already said he will seek the presidency. “Well, we know he is going to go again now, don’t we?” Mr Craughwell said last night of the President’s comments. “I will now step up my campaign to secure nominations.”

A presidential candidate needs the support of 20 members of the Dáil or Seanad, or the backing of four councils, to get on the ballot paper. A number of Independents TDs and Senators have said they will sign the nomination papers of candidates who want to get into the race.

Anyone thinking of contesting the presidency would have to give it serious consideration in the coming months in order to prepare to fundraise and secure the nomination.

Mr Higgins has said his decision will not affect anyone else’s on whether to stand.

A previous example being cited is 2004, when Mary McAleese did not nominate herself as an Independent candidate for a second term, as is allowed under the Constitution, until after the election had been called, although it was widely expected she wanted a second term.

The Labour Party decided against standing a candidate, despite the desire of Mr Higgins, then a TD, to contest the election. Mr Higgins criticised Labour TDs and senators for a “lack of energy and courage” in failing to support his bid.

Ms McAleese was the only candidate at close of nominations and was returned unopposed.