President coy on possibility of running for second term 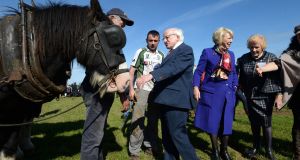 President Michael D Higgins says he will not announce if he is going to run for the presidency again until September 2018.

In an interview at the National Ploughing Championships yesterday, the President said: “I am going to give the job my full concentration and will make an announcement after the summer next year.”

With his first term in Áras an Uachtaráin due to expire the following month, in October 2018, it would not leave enough time for political parties or other groupings to mount a full campaign in the event that he stepped down.

Mr Higgins said before his election in 2011 that it was his intention to serve only one term. However, in more recent comments, he has changed his position by not ruling out the possibility of seeking a second term.

The indications are that Fine Gael, Labour and possibly Fianna Fáil would not oppose a second term for the incumbent President. However, some Oireachtas members, including Fianna Fáil’s Ned O’Sullivan and Independent Gerard Craughwell have argued for a contest, with an alternative offered to the electorate.

President Higgins, speaking to RTÉ’s Today with Sean O’Rourke, said by the time the ploughing returned in September 2018 “you should have a very, very good idea” about his intentions.

In his speech opening the championship, Mr Higgins referred to research by David Meredith of Teagasc that found that one farm in three was vulnerable because it did not have an off-farm income source.

He said that rural decline and the lopsided development of cities did not have to be inevitable and received as if it were the “way of the world”. He said it could be tackled if the will was there.

Asymmetrical development in Ireland had left us, he said, with “rural depletion and urban diseconomies”.

“It affects not only those who work in agriculture and make their living on the land, but impinges on the whole of society.

“Achieving a balanced society and economy was always the main purpose of regionalism, regional theory and planning, an emphasis that has fallen out of favour with the privileging of sectoral thinking.

“When rural communities struggle with a lack of adequate infrastructure and with an exodus of its young people, this is a matter not only for those affected, but for all of us; when rural towns become sleeper communities because 71 per cent of all jobs associated with new foreign direct investment is concentrated where existing clusters are located; when, as recent census figures show, despite an overall increase in our population, population numbers have fallen in 40 per cent of the electoral divisions of our country; when, as current figures suggest, one-third of Irish farms are deemed economically vulnerable, this is a situation that concerns us all,” he said.

Elsewhere at the festival, Fianna Fáil leader Micheál Martin, and the party’s agriculture spokesman, Charlie McConalogue, focused on the impact Brexit would have on agriculture. Mr Martin said it was not a foregone conclusion that Britain would leave the customs union and the common market.

“We would condemn the Government for the urbanisation of the island and the cuts which affect people and services, post offices, broadband, Garda stations and health services,” he said.