Higgins will not reveal presidency intentions until September 2018 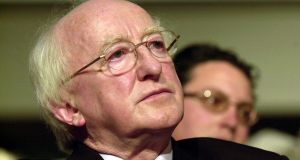 Higgins’ current seven-year term as President is due to come to an end in October 2018 if it is not renewed. Photograph: Brenda Fitzsimons/The Irish Times

President Michael D Higgins says he will not announce if he is going to run for the presidency again until September 2018.

His current seven-year term as President is due to come to an end in October 2018 if it is not renewed.

If no-one contests the election Higgins’ would serve a second seven-year term.

Independent Senator Gerard Craughwell said last month he would run as a candidate for the presidency next year to ensure there is an election.

Speaking on RTÉ’s Today with Sean O’Rourke show at the National Ploughing championships in Co Offaly, President Higgins said he is not ruling anything out.

He said he is getting great support from the public and he is determined to concentrate on doing the job well.

The president said he has a full programme ahead of him in the current months with a trip to Australia and New Zealand, a visit to Europe in the spring and he has been invited to Canada by prime minister Justin Trudeau.

“I am going to give the job my full concentration and will make an announcement after the summer next year.”

He also spoke of his grandfather’s uncle who emigrated to Australia in 1862. He was a ploughman who won numerous prizes in the Darling Downs in the 1860s and was the first person to drive a steam plough in Australia.

“Five out of the seven members of his family went to Australia. He had 10 children, his wife died in childbirth with the tenth child.

“He then married a widow who had four children and they went on to have five more, that’s why I have 243 relations in Queensland. ”