Higgins calls for ‘protection and fair system’ for farmers

The IFA President Joe Healy warned that a no-deal Brexit would be "Armageddon" for the Irish beef industry at the 2019 National Ploughing Championships. 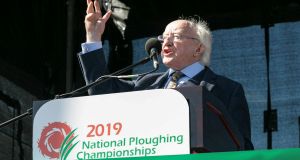 Farmers need “transparency, protection and a fair system,” President Michael D Higgins has said, opening the National Ploughing Championships in Co Carlow against the backdrop of the beef dispute.

On the first day of the biggest annual event in rural Ireland, Mr Higgins came out strongly in support of the small farmer and the family farm and called for more information to be made publicly available around the economics of food production, from farm to factory.

The President expressed concern about “the vulnerability of the rural producer” who “may have only one purchaser” and “who really needs protection”.

“They need transparency, protection and a fair system,” he said, at the start of the three-day event at Ballintrane that is expected to attract 250,000 people.

The president evoked the 19th-century Land League campaign for the rights of tenant farmers in his address that officially opened the 88th annual festival that showcases Irish food, farming and rural culture.

“The word fair was there in the campaign for fair rent so let us now have fair produce, fair treatment for everybody involved and let’s move on from that,” Mr Higgins said.

Tensions in the beef industry reached the ploughing championships as a group of angry farmers confronted officials at the tent operated by Bord Bia, the Irish food agency, accusing them of not supporting Irish farmers.

The farmers complained about Irish meat being processed in Britain before coming back to Ireland to be sold.

The tent was closed for a time and security was placed outside.

In his speech, the President acknowledged that not all farmers supported the deal brokered over the weekend aimed at resolving the bitter seven-week dispute over the prices paid for beef but he urged all parties involved to see this agreement as the first step to finding an eventual resolution.

He urged people attending the festival to “think and reflect” on the challenges facing farmers in rural Ireland and offered his good wishes to “those who want to see a future for the family farm.”

“One word of advice from someone of my experience, if it can’t be solved by what’s on offer, it is a beginning and beginnings are important,” Mr Higgins said of the agreement.

The President said that he hoped by the end of the ploughing championships this year that all parties would have a better understanding of the contribution of each of the parties, from farm to fork.

“I hope by the end of the ploughing that you will all know the importance of how in fact the contribution is divided between the agent of production, the farmer, the processor and the retailer,” he said.

“Everybody should know more and when we know more you can make good decisions.”

Mr Higgins touched on the “challenging times” facing the farming sector, North and South, from the UK’s decision to leave the EU, without specifically mentioning Brexit.

“Nobody more than the farming sector, North and South on this island, know the benefit of the Good Friday Agreement and therefore I can tell you that governments and oppositions and others are absolutely really concerned that the benefits that have flowed to the agricultural community must be protected,” he said.

“There will be many challenges. I believe myself that you will be well, well prepared for them all.”

The potential fallout from Brexit on the agri-food sector, which would be worst hit in a no-deal exit, looms large at this year’s championships with the Government’s Brexit information stalls featuring prominently.

The uncertainty around the timing and manner of the UK’s departure, which remains undecided, is reflected at ploughing championships on the Government’s official posters where a line “44 days until Brexit” – referring to the next deadline facing the UK on October 31st – has been blanked out with paper.