Francis McGuinness served in the British Army in WW2 and landed in Normandy on June 6, 1944. McGunniess would later met his wife in Germany who was a German auxiliary and working on a farm. Video: Ronan McGreevy 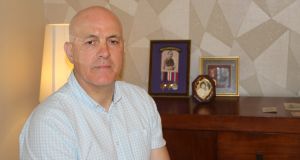 One of the first Allied soldiers to die on D-Day was Pte Edward Delaney O’Sullivan, known as “Paddy”, who landed with the Parachute Regiment outside Touffreville in the early hours of the operation.

More than 300 Irish were killed while fighting with British and Canadian forces during the Battle of Normandy. Many more died with the Americans, says former Irish officer Dan Harvey in his book A Bloody Dawn: The Irish at D-Day.

Pte Francis (Frank) McGuinness, from Drogheda, Co Louth, was one of those to survive.

Just 21, he landed on Gold Beach on D-Day with the 1st Hampshire Regiment, the first British regiment ashore.

He had spent a short time in the Irish Army but travelled to the North to join up with British forces in Newry along with a trainload of similarly-minded Irish men. Frank recalled another Irish potential recruit being turned down because of his teeth. The disappointed candidate responded to the examining doctor: “I intend to shoot Germans, not to eat them.” He got in.

Like the majority of those who landed on D-Day, McGuinness had never been in combat, but he was serving alongside Dunkirk veterans. Gold Beach was the middle of the five D-Day landing beaches. It was solely a British objective.

Nearly 8km long, the area was ringed by hotels and holiday apartments the Germans had commandeered to optimise the field of fire. The ultimate British objective was Bayeux, where German Panzers waited in reserve.

The Hampshire Regiment’s supporting tanks never arrived and they had to fight their way off the beaches without them. By the end of the day, the battalion had suffered 182 casualties, including 64 dead.

Peter McGuinness is one of four of Frank McGuinness’s sons who joined the Irish Army. He is a 34-year veteran of the Defence Forces, and military service clearly runs deep in the family. A great-uncle was killed at Ypres during the first World War.

“My father said of D-Day, if ever there was a hell on Earth, that was it,” Peter says. “It was like taking a boat ride into hell. He thought he was going to be killed on the beach. It was sheer luck whether the machine gun dispersed left or right.

“My father reckoned more guys drowned than got shot. He was a good swimmer. He dragged many of them out of the water, but to no avail. They got killed before they got off the beach.”

Frank McGuinness sent back field postcards a few days after the Normandy landings. His son still possesses them.

These were pre-filled postcards that were sent back to worried relatives simply stating that a combat soldier was alive or dead, injured or uninjured.

Sometimes the cards arrived before the dreaded telegram telling a family that their relative had been killed.

Peter (53) is an avid reader of history books, but says that no book can teach him as much about history as his own family story.

His father married a German woman, Else Michalski. She was part of the German Women’s Auxiliary Services and operated searchlights which tracked Allied bombers during the war.

As her surname suggests, she grew up near the Polish-German border. Frank McGuinness met her while his regiment was occupying the area where her family’s farm is situated.

Fraternising with the enemy carried a prison sentence of five years for Allied forces. Having volunteered to put himself in harm’s way in the first place, Frank McGuinness was prepared to take the risk for Else.

Sitting in the kitchen of his Dundalk home, Peter McGuinness says his parents would never have met in any other circumstances than the war. His father left school at 12 with few prospects. “He was hard-reared. He didn’t wear shoes on his feet until he was a teenager.”

His mother was middle-class and educated. She had met Adolf Hitler during his rise to power. The war destroyed everything she knew. She claimed to come from a place called Bassen, but her family could never find it. Her father fought the Russians in the first World War; a brother was killed on the Russian front during the second. “My mother’s story is just as interesting,” he says. “There was a total disconnection. She didn’t want to go back to where she was from.”

Frank McGuinness stayed in the British army after the war. He left in the early 1950s and returned to Ireland with his German wife.

Frank’s own mother would not take remittances from his army pay. It was “blood money”, she suggested. He had to request the War Office not to send letters with the crown on them.

“He was known in Drogheda as Frank McGuinness the ex-British soldier,” Peter explains. “Not only that, but he brought a German bride home with him. You can imagine that a lot of people in Ireland lost people in the first and second World Wars to Germans. It didn’t matter what kind of German you brought home. My mother didn’t speak a word of English when she arrived in Ireland.”

Frank got odd jobs but retired from ill-health in his late 40s. He died in 2000 aged 77. His wife died in 2008. They had 12 children, of whom Peter is the second youngest. In 2003, he returned to the beach where his father fought. Dressed in his Irish Army uniform, he laid a wreath in memory of his father.

“He hadn’t the education, but he was educated in life. I was proud to be the son of a man who did take it upon himself to make a difference,” he says.

“My father said to me, and I’ll never forget it, that Nazism wasn’t going to stop at England. It was going to come into Ireland. It took him and men like him to stop Hitler on the beaches of Normandy, and that’s what he did.”

Ian “Tommy” Harris’s son Armor says his first name is an old family one and has nothing to do with his father’s role as one of the most senior Irish-born commanders on D-Day.

Tipperary-born Lt-Gen Sir Ian Harris was second in command of the men from the 2nd Battalion Royal Ulster Rifles who came ashore at Sword Beach. He assumed command after his superior was injured.

The Royal Ulster Rifles was the only regiment in the British army which had both of its battalions in combat on D-Day. The first one came in by glider at Pegasus Bridge; the second landed at Sword Beach as part of the second wave in the attack.

Though the beach had been cleared of attackers, they still faced mortar and artillery fire. Some men landed in 4 to 5ft of water and nearly drowned.

They faced serious opposition on the following day, when more than 40 men were killed at Cambes-en-Plaine, a prelude to the fierce Battle for Caen.

In a letter to his sister Lala, who lived in England, Harris said of D-Day: “I had been sick a couple of times & in fact had the wettest landing I had ever experienced. The Battn is still in great heart. The officers & men did magnificently in their first attack. We had a hard time but the lads were grand. While under heavy fire they went forward as if on an exercise no wavering in spite of such a severe ordeal for their first real action.”

In retirement he returned to Ireland to manage the family’s Ballykisteen Stud and eventually became president of the Irish Bloodstock Breeders’ Association.

Armor Harris said of his father: “When you have been to the cemeteries, [you see] the ages of the men who died, 18, 19 or 21, it was the first time they had been fired at.

“It’s a devastating event. All the people who survived said: ‘We are not the heroes, the ones who died were the heroes.’

“My father always said he was an Irish man. When he retired in 1969, he met Dev [Éamon de Valera] and Dev said to him: ‘We are glad to have people like you down here.’

“He was not at all British. He was an Irish man who was proud to have served in the British army really. He was a peacemaker. He liked peace, he didn’t like war.”

Redmond Cunningham, who was born in 1916, was named after his godfather John Redmond. Redmond Cunningham’s father Bryan had been the former Irish Parliamentary Party leader’s election agent.

John Redmond had asked Irish men in the first World War to go “wherever the firing line extends in defence of right, of freedom and of religion”, a call that was answered by his namesake, albeit in a latter conflict.

Redmond Cunningham was born in Waterford city and was working as a trainee draftsman when the second World War broke out. He was gazetted as a second lieutenant in the British army in June 1943 and was on a landing craft during D-Day.

Two days before D-Day, he had gone to London for a night out with a friend. The friend was subsequently killed from sniper fire directed at his landing craft.

Redmond Cunningham won the Military Cross, one of the UK’s highest awards for gallantry, for an incredible act of bravery on D-Day.

On D-Day, he and a group of other sappers (engineers) cleared a path through a minefield by hand while under fire, enabling his unit to seize the lock gates at Ouistreham. The unit went on to capture 90 German soldiers.

He later added a bar to his Military Cross, the equivalent of a second medal, in February 1945 when leading an operation against German troops who were occupying a dyke in Holland. He was wounded in the assault.

The Belgian government gave him a Croix de Guerre for his actions after a German V2 explosive hit a square in Antwerp, killing 100 civilians.

His son, the novelist and Aosdána member Peter Cunningham, says he is “fantastically proud” of his father, and that the Military Cross he won on Sword Beach had been an “incredible achievement after six of the most extraordinary hours of action that you could imagine”.

After the war, Redmond Cunningham returned to Waterford, where he set up a practice on the quays with his brother William. The company became R&W Cunningham, architects and engineers.

Peter says his father was motivated by a “sense of adventure and a sense of wanting to do the right thing” when he joined the British army, and he was able to resume a normal life after the war.