If agreement cannot be reached on scheme, money ‘could be re-allocated’ to other cities 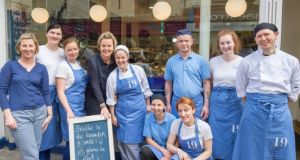 Claire Nash (fourth from left) with her staff at Nash19

A Cork businesswoman who almost lost her business after the floods of 2014 has expressed concern that the Government may reallocate €140 million designated for the Cork city flood relief scheme if agreement can’t be reached on the project.

Restaurant owner, Claire Nash, who runs Nash 19 restaurant on Marlborough Street in Cork, said she had serious concerns that the OPW Lower Lee Flood Relief Scheme could be used on flood schemes elsewhere.

“I am very concerned that if the project is delayed, then the money be lost to Limerick, which has a very strong political voice, or to Galway, which has suffered very bad flooding in recent times, or all the way up to Donegal, which also has been hit by serious flooding in the past year,” she said.

The OPW plan to raise wall levels along many of the city centre quays has led to a campaign of opposition by the Save Cork City group, which says the plan will reduce both visual and physical access to both the north and south channels of the River Lee through the city centre.

Ms Nash said while she was anxious for the Lee not to be blocked off and for Cork to remain an attractive city, she was also conscious of the need for work on the flood relief to start soon, as it was having a serious impact on her insurance costs and on her business, where she employs 21 people.

Speaking at a discussion entitled Flooding in the Cork Region - Impacts and Solutions, organised by The School of Building and Civil Engineering at Cork Institute of Technology, Ms Nash revealed the constant fears of flooding with which traders in Cork city centre have to contend on daily basis.

She said she had suffered substantial damage in 2009 when the ESB was forced to increase discharge levels at Inniscarra Dam and much of Cork city centre flooded. She suffered devastating damage in 2014 from tidal flooding caused by high tides and a south easterly wind, she said.

President of the Cork Business Association (CBA) both years her business was flooded, Ms Nash said although she had flood insurance in 2014, she ended up spending €320,000 on repairing the damage.

Although she hired builders to put down a tar and bitumen lining and a weather proof floor after the 2014 flood, when she spoke to her insurer, they raised concerns that there was no flood protection scheme in place for Cork city, which resulted in significant increase in insurance costs.

She revealed that after the 2014 flood, her insurance has gone up by 102 per cent to €25,800, but it no longer includes any flood cover, while restaurants operating in parts of the city that are not susceptible to flooding can get insurance with flood cover for around €8,000 to €9,000.

“The insurance company’s big concern was there was no flood defence system in place even though when the CBA met Minister Brian Hayes in 2014, he guaranteed there was €140 million available for flood relief and Minister Simon Harris told us the same in 2015 but three years on, we’re still waiting.”

Ms Nash’s comments were echoed by CBA chief executive Lawrence Owens who said that his 200 plus members were very worried about what was going to happen if agreement can’t be reached among interested parties on the ground and the scheme is deferred until consensus is reached.