Some 1.4m flu vaccine doses for adults secured but no universal scheme planned 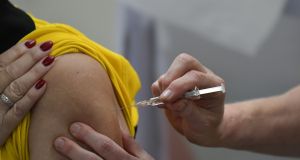 The HSE is seeking a contractual arrangement with the private sector in relation to the provision of CT and MRI for GP referral. Photograph: Tobias Schwarz

The burden which the health system is facing in the months ahead between Covid-19, flu and the ongoing growth in demand for services is very concerning, the Health Service Executive has said.

HSE national director for acute services Liam Woods told the Oireachtas committee on Covid-19 that it was going to be “very, very difficult to respond to both the elective demand and the unscheduled care demand with the surge we know that is coming this winter”.

The committee heard that doctors had sought the introduction of a vaccination programme for flu which would be offered to the whole population.

However, the HSE said it had no plans to introduce such a universal scheme.

HSE national director for emergency management Damien McCallion said it would secure about 1.4 million doses of flu vaccine for adults and a further 500,000 or so for children aged between two and 12.

The HSE said flu vaccination would be offered to at-risk groups as well as healthcare staff.

Mr McCallion said the level of flu vaccine to be purchased was based on the needs as set out by public health specialists.

Deputy Róisín Shortall of the Social Democrats said she was very concerned the flu vaccination programme this year was only aimed at involving an additional 200,000 adults compared with last year.

HSE lead clinical director of the BreastCheck programme Prof Anne O’Doherty said the suspension of screening was right at the time. However, she said she was very conscious the system had a lot of ground to make up.

She said the health service had been working to look after women with symptoms.

“Our ability to get back to screening normally is very limited until we get to a situation where we do not have to have two-metre social distancing,” she said.

Mr Woods said work was under way to expand hospital capacity, including modular units in some areas. However he said some may not be in place for this winter.

He said hospitals were putting a lot of energy into prioritising patients who needed urgent endoscopies. “ In the Covid environment, there is much greater precaution required in terms of undertaking scopes.”

Mr Woods also said the HSE was looking at the provision of greater access to diagnostics for GPs to alleviate pressure on hospitals as a significant piece of its winter planning .

He said the HSE was seeking a contractual arrangement with the private sector in relation to the provision of CT and MRI for GP referral.

Mr Woods also told Louise O’Reilly of Sinn Féin that while no patient had been treated in the “field hospital” it had established at Citywest in Dublin, it was looking at using the facility in relation to out-patient services and to test up to 2,000 patients for glaucoma before its contract expired in October.

Mr Woods also said that there had been a net increase of 526 in the number of doctors including 140 consultants since the start of the year.

In a submission to the committee, the HSE said if there there was a second wave of Covid-19 in the coming months “ the system will not have the capacity to meet unscheduled care demand unless specific actions are taken” such as the expansion of the flu vaccine, ongoing leveraging of private capacity and timely hospital discharge for older people.