He said I should be fed bananas: bus drivers speak about racist abuse

Drivers recount their experiences of being threatened and racially abused 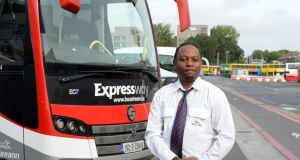 Gideon Mua, a Bus Éireann driver from Kenya. Incidents he has experienced range from rudeness, including people throwing their bus fare at him, to overtly racist abuse. Photograph: Alan Betson

Bus driver Gideon Mua (42) has frequently experienced abuse while at work with Bus Éireann because of the colour of his skin.

Incidents can range from rudeness, such as people throwing their bus fare at him, to overtly racist abuse.

In recent months, one passenger brandished a knife at him while on his bus, another told him he should be shot.

Last week, the National Bus and Rail Union (NRBU) said bus and rail services may have to be suspended from certain blackspot areas, due to an “epidemic” of anti-social behaviour.

The union said staff were subjected to increasing levels of assaults and abuse while at work, and concerns about their safety were not being taken seriously.

Mua, who lives in Dublin, came to Ireland from Kenya in 2000.

“I have had a few incidents. I was told I would be shot. I’ve been told I’m just here to rob the jobs from the Irish – I don’t know if that is racist, or just ignorant,” he says.

“A few times I’ve been told I should go back to where I came from.”

He recalls one incident where he was threatened at knifepoint by a passenger, while driving through Athlone.

“He showed me a knife, he literally showed me the blade, he told me he could stab me, the passengers, and the gards could do nothing about it.

“You could tell he had [taken] drugs... I tried to keep cool and talk to him.”

The Bus Éireann driver was successfully able to defuse the situation, and the man got off the vehicle at the next stop, he says.

Another incident of racial abuse while working stands out. It took place while he was driving the Dublin to Galway route.

A passenger, who Mua knew had been barred from travelling with Bus Éireann, attempted to board the bus. “I told him, ‘you know the drill’, and he went ballistic,” he says. The passenger tried to push his way on to the bus, but was stopped by the driver.

“He said I should be shot, and taken back to where I came from and fed bananas,” he says. Mua reported the incident to An Garda Síochána and Bus Éireann but says he had not heard from the company about the matter since.

Dermot O’Leary, NBRU general secretary, says the union had called for a “dedicated Garda public transport division for some time”, in response to antisocial behaviour and assaults.

“The assaults on staff, and indeed commuters, are increasing at an alarming rate. Staff are in fear of going to work,” O’Leary says.

Grzegorz Cieslik (36), another Bus Éireann driver, was attacked while at work last Halloween. He moved to Ireland from Poland in 2005, and has worked for the company for two years.

Waiting for gardaí, the passenger became increasingly aggressive. “He said: ‘Listen, I will kill everyone on the bus if you don’t go right now,’” Cieslik says.

The man approached the driver’s seat, and pushed Cieslik, after which a scuffle ensued, where the driver says he was seriously assaulted.

“I had whiplash, shoulder damage, damage to my front teeth.” He says it kept him out of work for several months.

“I did not know what was in his head – he could have [had] a knife. I’m still a little bit scared to drive,” he says. He is also critical of the level of support he received from the company while out of work.

A spokesman for Bus Éireann says “incidents of anti-social behaviour are rare on our services but they can cause distress to staff and customers”.

Buses are fitted with CCTV cameras, and drivers have a radio link to control centres, who can alert gardaí of any potential incidents, the spokesman says.