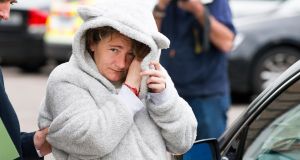 Karen Harrington (35) has been charged with the murder of two-year-old Santina Cawley in an apartment in Cork city last month. Photograph: Daragh Mc Sweeney/Cork Courts.

A pregnant woman charged with the murder of a two-year-old girl in an apartment in Cork city last month has been granted bail.

Karen Harrington (35) was told by Ms Justice Eileen Creedon that she must comply with the conditions of her bail or face an immediate return to custody.

Ms Harrington was charged at Cork District Court on August 21st with the murder of Santina Cawley at Elderwood Park, Boreenamanna Road, on July 5th. She has been in custody since.

Her application for bail in the High Court on Thursday was opposed by the Director of Public Prosecutions (DPP). The court heard that people charged in murder cases can have to wait for up to a year for a trial date.

Ms Justice Creedon said that while the charge involved was clearly serious, the court had to be mindful of a person’s presumed innocence.

Having heard evidence from Det Garda Ian Coughlan, Ms Harrington, and a friend of Ms Harrington’s, who told the court the accused could stay in her home, the judge said she had decided to grant bail on “very strict conditions”.

During the hearing Ms Harrington, who is 4½ months pregnant, said she understood that she would have to attend court when required.

“I need assurance myself and I need closure for this,”she said.

The conditions set by the court include that Ms Harrington be of good behaviour, reside at her friend’s house and sign on a particular Garda station in Cork every morning and afternoon.

Ms Harrington was also told she must be indoors between 8pm and 8am every day, and at all times carry a charged mobile phone the number for which is to be given to the authorities.

She was also told that she must stay away from the address where the alleged offence occurred, and not have any contact with any witnesses or members of the family of the deceased child.

Ms Harrington, who the court heard was from Cork and was reliant on social welfare, is also to surrender her passport.

The conditions of bail also included the making of a €5,000 cash deposit, money the court was told had been raised by family members and friends to support the bail application. Ms Harrington will not be released on bail on until the matter of surety is finalised.

During the hearing Det Garda Coughlan told barrister Carol Doherty, for the DPP, of his reasons for being opposed to bail being granted. He agreed with barrister Aoife O’Leary, for Ms Harrington, that no book of evidence had yet been served in the case.

A hearing in the Cork District Court earlier this month was told by Sgt John Kelleher that when he put the charge to Ms Harrington, who is not related to the deceased child, she replied: “I don’t understand why I am getting charged. I didn’t murder no one.”

Santina was found with critical injuries in a flat on the morning of July 5th and was taken by ambulance to Cork University Hospital, where she died a few hours later.