Protests over Johnson’s Brexit strategy to spread to Dublin

A group of Ireland-based Britons calling themselves 'Brits Not Out' have held an anti-Brexit protest outside the British embassy in Dublin. Video: Bryan O’Brien 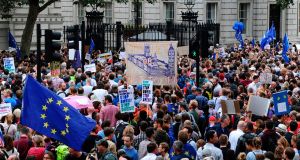 Anti-Brexit demonstrators hold placards as they protest outside of Downing Street in London on Wednesday after British prime minister Boris Johnson announced the suspension of parliament. Photograph: Daniel Sorabji/AFP/Getty Images

A group of anti-Brexit British people living in Ireland will hold a demonstration outside the British embassy next week to protest at the UK government’s plan to suspend parliament.

The newly formed group, called Brits Not Out - formed by British staff members of the public service union Forsa - are protesting over the threat of a forced no-deal Brexit arising from the planned suspension.

The demonstration takes place at 6pm next Tuesday outside the UK embassy on Merrion Road in Ballsbridge, Dublin on the day that the House of Commons returns from its summer recess.

British prime minister Boris Johnson wants to suspend parliament until the Queen’s Speech on October 14th in a move that will shorten the time MPs have to block a no-deal Brexit before the October 31st deadline.

The move has led to protests in London and other British cities.

The Dublin protest is aimed at British people living in Ireland and their supporters who “care about democracy at home and the probable impact of Brexit in both countries”.

“We are calling on the many British nationals who have made their lives in Ireland to join our protest against this outrageous and undemocratic act,” said the group’s spokeswoman Grace Williams.

“We are care deeply about British democracy and the negative impact that Brexit, especially a hard Brexit, will have on our families, friends and communities in the UK.

“And we care equally about the threat that Brexit poses to jobs, peace and prosperity on this island, where we’ve been welcomed and where we are now living our lives.”

Forsa head of communications Bernard Harbor, who is originally from England, said that a few work colleagues decided to organise the protest to “make our feelings known and encourage others to come on board.” He hoped non-British living in Ireland would join the protest because of Brexit’s impact.

The name of the group encapsulates the desire to remain in the European Union and that members are British subjects living in Ireland as well as being a nod to the relationship between the two countries, he said.