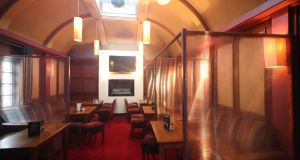 Guinness has launched a €14 million fund to help Irish pubs preparing to reopen following the easing of coronavirus restrictions.

The “Raising the Bar” programme is aimed at helping pubs across the State adapt to new post-lockdown trading conditions as part of a $100 million (€88.4 million) global fund by owner Diageo.

Although self-motivated – Guinness is a staple of Irish bars the world over – the move will be welcomed by a sector that has been among the hardest hit in an era of strict social distancing.

Beginning next month, Diageo’s two-year global programme will be open to applicants in major cities including New York, London, Edinburgh, São Paulo, Shanghai and Sydney, among others, and follows research into what supports bar owners most need.

Here, it will focus on the provision of practical equipment and “confidence-building measures needed for outlets to reopen and operate on a safe and sustainable basis”.

The State’s 7,000 pubs were first asked to shut their doors in mid-March amid the Covid-19 pandemic, a move that left about 50,000 people out of work overnight. At the time, one industry representative described it as the “biggest loss of jobs in the history of the State”.

From June 29th, many pubs are set to reopen and operate as restaurants, with guidelines on how they should do so recently published by Fáilte Ireland.

Oliver Loomes, managing director of Diageo Ireland, said the company’s ambition is to support pubs “in welcoming back customers in the safest possible way, when they are ready to do so”.

“The hospitality sector in Ireland requires long-term investment and support to get back up and running. Not only has the financial impact to their business been significant, but they have missed their place at the centre of Ireland’s social fabric,” he said.

“This fund is our commitment to the future of the local pub in Ireland.”

However, Diageo has also underscored the need for other forms of support. Chief executive Ivan Menezes said governments around the world need to provide “long-term recovery packages” for the hospitality sector.

The damage caused by Covid-19 to the hospitality industry is clear. Some 24 million fewer pints of beer and cider were sold in the Republic in April compared with the same month last year, while total alcohol sales fell 35.6 per cent, according to data released by lobby group Drinks Ireland.

While pubs are now preparing to welcome customers back, the atmosphere and operation will be far from familiar.

This month chief medical officer Tony Holohan warned that a resumption in trade would not mean several people meeting up “for a few pints and having a packet of peanuts”.

Under recently published guidance, pubs and bars will be allowed to implement 1m physical distancing restrictions from June 29th in “permitted controlled environments”, but will be required to serve a “substantial meal” costing at least €9 to customers.