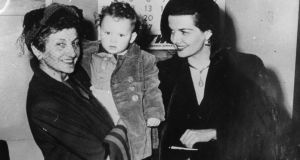 Jane Russell (right) with Irish-born infant Thomas Kavanagh at New York airport. The boy was taken to Russell by his mother, who pleaded with the Hollywood star to take him to the US. Photograph: Keystone/Getty Images.

Publicity surrounding the Hollywood actor Jane Russell and her adoption of an Irish baby angered the then government because it portrayed Ireland as ‘exporting babies’ for the benefit of wealthy Americans who wanted children.

Russell was one of the most famous performers in the world when in November 1951 she adopted Thomas Kavanagh, a 15-month-old born to Irish parents in London.

The adoption almost scuppered her career and led to allegations in the international press that Irish institutions were effectively selling babies to the highest bidder.

Tommy’s mother, Florrie turned up at the Savoy Hotel in London after she heard Russell was looking to adopt an Irish child. The Irish authorities became involved when Russell publicly complained that British law did not allow her to take the child out of Britain, which had stopped the practice in 1948.

Tommy was later provided with an Irish passport and visa and brought to the United States. The haste at which the Irish embassy in London granted the infant a passport was widely condemned.

Though Tommy Kavanagh was not adopted from an Irish mother and baby home, it brought them unfavourable attention internationally.

According to the report of the Commission of Investigation into Mother and Baby Homes, an article appeared in Empire News stating that “Canadian police believe they have stumbled on a ring of crooks who were selling babies for asmuch as £1,785 each” with doctors and lawyers implicated in it .

This prompted concerns from officials in the Department of External Affairs (DEA), which later became the Department of Foreign Affairs, that if babies were brought to the US on Irish passports and sold to the highest bidder, they would be blamed.

In January 1952, an official in the Irish embassy in London contacted the department in Dublin about issuing a passport for a child who had been placed with a US army couple based in Britain. The child was taken to the UK from Ireland without any travel documents and from there to the United States.

A department official responded by stating that though Russell’s adoption papers were in order it “ did not keep us out of trouble”.

The reputational damage to Ireland was such that the then Archbishop of Dublin John Charles McQuaid drew up new guidelines in the early 1950s. The church stated that it would no longer accept references from individuals such as employers or family friends, but only from Catholic charities and dioceses in the United States.

Prospective US parents were expected to swear an affidavit to the effect that they were Catholics, that they would bring their children up as Catholics and educate them in Catholic schools and universities.

The commission concluded that a tightening of the laws around foreign adoptions came as a result of bad press.

The commission had sight of a number of “certificates of surrender” signed by mothers giving up their children for adoption.

One gave a mother and baby home “complete custody and control of my child, with authority to place him/her in a family for legal adoption, whether out of Éire or otherwise; and I do agree and promise not to attempt to retake my said infant child from, or induce him/her to leave any place where she/he may be found.”

The commission found that of the 1,638 adopted from mother and baby institutions between 1922 and 1998, 1,427 children were adopted to the USA and 149 to Britain. Of those adoptions, 508, by far the most, were from Sean Ross Abbey in Co Tipperary.

The most famous adoptee was Philomena Lee’s son, Anthony, who she was forced to give up for adoption in 1952 to the Hess family in the United States. Her story was told in the successful film Philomena which was released in 2013.

Michael Hess went on to be a chief legal counsel to the Reagan and George W. Bush administrations. He died from Aids in 1995 before Mrs Lee could find him.