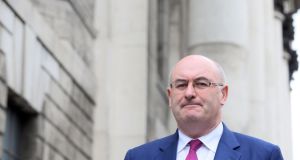 The Government has strongly suggested that Phil Hogan broke the State’s public health guidelines in recent weeks, but says that his future is a matter for European Commission president Ursula von der Leyen, who must now make a decision on the EU commissioner’s position.

In a statement on Tuesday night, the leaders of the three Government parties said that “concerns remain” about Mr Hogan’s movements after arriving in Ireland last month and the manner in which he has explained them. Senior sources confirmed it remained the view of the Government that Mr Hogan should resign as commissioner, and it is understood that Dr von der Leyen is aware of this.

However, Government Buildings sources acknowledge the matter of his future is a decision for the commission president, and it is understood that Taoiseach Micheál Martin has not spoken directly to Dr von der Leyen. Sources say, however, that there have been extensive contacts between officials.

The Government statement, the latest development in a controversy that has transfixed domestic politics since last week, came after a dramatic day when Mr Hogan delivered a lengthy explanation of his attendance at the controversial Oireachtas golf dinner and a timeline of his movements in the period preceding the event.

He again apologised for his attendance at the event, but insisted that he did not break any health guidelines – saying that a negative Covid test excused him from quarantining after arriving here from Belgium and exemptions for essential work meant he was permitted to break the local lockdown in Co Kildare.

Mr Hogan said it was there “black and white” on the Citizens Information website that anyone who has had a negative result in a Covid-19 test was no longer required to self-isolate. But the Department of Health disputed this, saying that this did not apply to people arriving in the country, who were required to complete their period of quarantine despite a negative test.

Other elements of Mr Hogan’s explanation have also been called into doubt. Mr Hogan dined in a public restaurant at the K Club on the night he flew into Ireland from Brussels last month, according to a woman who saw him in the restaurant.

The Leinster woman, who did not want to be named, told The Irish Times that Mr Hogan dined with two other guests at the table behind her and her husband on the night of Friday, July 31st.

“We were there for our wedding anniversary; he was seated at the table behind us with two other gentlemen,” she said.

The revelations undermine Mr Hogan’s claims on Tuesday that he flew into Ireland on July 31st and “self-isolated for the days up to the 5th of August”, when he tested negative for Covid-19 at a medical appointment in a Dublin hospital.

A spokesman for Mr Hogan had no comment to make on the July 31st dinner.

The woman who said she sat at the table next to his that night said that she was “totally surprised” that Mr Hogan was now claiming that he abided by public health rules.

Another woman, Niamh Duffy, from Co Cork, said she stayed at the K Club during the first week of August and saw Mr Hogan using public areas of the resort when he should have been self-isolating.

The Irish Times has also learned that Mr Hogan made a social visit to Co Roscommon on August 17th that was not disclosed in the itinerary of his movements published by the European Commission.

It is understood Mr Hogan paid a social visit in the county on the day in which he travelled from Co Kilkenny to Co Galway via Co Kildare.