Government criticised over failure to protect Irish citizens in the North

Academic says Belfast Agreement being disrespected on a ‘sustained basis’ 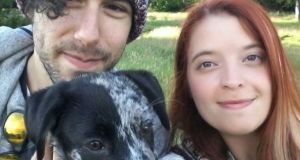 Among those present at the committee were Derry woman Emma de Souza. She wants to exercise a European Union right to bring her American-born husband, Jake (left), to live with her in Derry. File photograph: Emma de Souza

Irish citizens in the North “have had enough” and want to see the Irish Government stand up for them to ensure that they do not have a “second-class version of citizenship,” an academic has said.

Professor Colin Harvey of the School of Law in Queen’s University Belfast said the Irish Government needed “to lose that anxiety and caution about defending, acknowledging and recognising the rights of Irish citizens” who live in Northern Ireland.

Professor Harvey told the Seanad Special Select Committee on the Withdrawal of the UK from the EU on Wednesday that he was speaking in his capacity as an Irish citizen who was born in Derry and lives and works in Belfast.

Professor Harvey said the terms of the Belfast Agreement made provision for parity of esteem, mutual respect and equality of treatment. He suggested the agreement is being disrespected on a “sustained basis”.

He told the committee that a bill of rights, as outlined in the agreement, has been stalled for the last 10 years and could have dealt with the issues of equal marriage, women’s rights and language rights which have contributed to the failure of the Stormont institutions.

Deputy director of the committee on the Administration of Justice (CAJ) Daniel Holder said the memorandum of understanding (MOU) relating to the common travel area which has just been published needs to be underpinned by an internationally recognised treaty. The CAJ is a Belfast-based independent human rights organisation.

The commitment in the Belfast Agreement that citizens in the North could be British, Irish or both was generally adhered to before 2012, but changes were made after that date when Theresa May took over as Home Secretary, Mr Holder told the committee.

It coincided with the introduction of the UK’s “hostile environment policy” which made it much more difficult for illegal immigrants to remain in the country.

He said the UK sought to reinterpret the entitlement to Irish citizenship in a way that “completely stretches credulity” and the Belfast Agreement had no dispute mechanism to resolve the issues involved.

“It’s no wonder that the EU insisted on a legally binding backstop,” he said. “You can’t have some kind of supranational mechanism that can enforce commitments when you have this long and consistent track record by the UK of signing legally binding international agreements and not abiding by their provisions.”

Mr Holder said Brexit will “turn everyone (in the North) into a second-class citizen. British citizens in the North will be deprived of the benefits of EU citizenship and freedom of movement. Irish citizens will have EU rights and entitlements but they are likely to be restricted after Brexit.

The right to vote in EU elections, to retain a European Health Insurance card, the right to cross-border health and education and to be joined by family members who are non-EU citizens will not automatically be covered after Brexit, he said.

Among those present at the committee were Derry woman Emma de Souza.

She wants to exercise her European Union right to bring her American-born husband, Jake, to live with her in Derry. The application was initially refused on the grounds that DeSouza is a British citizen by birth in Northern Ireland and therefore a dual British/Irish citizen. DeSouza appealed arguing that under the Belfast Agreement the people of Northern Ireland can be Irish or British or both and that she was an Irish national only. DeSouza has been successful in the courts but an appeal is still pending from the Home Office