Garda to set up anti-corruption unit by year-end 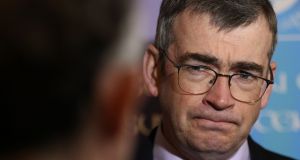 Garda Commissioner Drew Harris does not believe the new unit will clash with the work of the Garda Síochána Ombudsman Commission, which investigates complaints made against gardaí. Photograph: Nick Bradshaw

A new anti-corruption unit is being established in the Garda to investigate members of the force, Garda Commissioner Drew Harris has said.

The new unit would not only investigate complaints but would seek out corruption, which Mr Harris defined as behaviours that militated against the Garda being an ethical and “healthy” organisation.

He said there were major threats that could impact the integrity of the organisation.

“There is no room for those in the organisation who would behave in such a way which is either crime or well outside the standards of behaviour that I, and the public, expect of members of An Garda Síochána.”

Mr Harris said plans for a new unit had been drawn up by Assistant Commissioner Dave Sheahan and had just been submitted for consideration.

The unit would be based at Garda Headquarters, Phoenix Park, Dublin. It would be established and operating by the end of the year.

Asked whether corruption was so widespread it necessitated a dedicated unit in the Garda, Mr Harris said such behaviours would be discovered only by proactive investigating.

“One should look for it,” he said of corruption. “Our integrity is not negotiable. People should be very clear that we are serious about having a good organisation; well run and healthy.

“And that means dealing with wrongdoing as quickly as it appears and working in a collaborative sense with our other partners in this, and that obviously is Gsoc.

“I want to find it. I want to know if it’s there and be able to conduct a threat assessment and then know what resources we need to put to its investigation.

“But, very clearly, the purpose of doing this is to make sure that we can find it; if we don’t look for it, it’s nigh on impossible to come across these matters.”

Mr Harris made his comments at the annual conference of the Association of Garda Superintendents in Naas, Co Kildare.

He did not believe the new unit would clash with the work of the Garda Síochána Ombudsman Commission (Gsoc), which investigates complaints made against gardaí.

The Garda was best placed to find corruption in its own ranks and would do so better than any outside agency, he said. However, any information unearthed by the planned Garda corruption unit would be shared as intelligence with Gsoc.

The president of the Garda Superintendents Association, Supt Noel Cunningham, said his organisation wanted to see more Armed Response Units. More Garda members should be trained for these units until anywhere in the Republic could be reached within 15-30 minutes by one of the units in the event of any emergency.

Supt Cunningham said the Garda had a duty of care to its own unarmed members on the frontline and to the public, and being able to scramble an armed response very quickly to any part of the State under 30 minutes or less was crucial.

Mr Harris said some 70 Garda members would be trained this year for deployment to new armed units; with 40 already deployed and 30 to follow.

He added deploying the units to many parts of the Republic within 30 minutes would be possible when the intended full complement of unit members were in place. But in some remote rural locations such a timeframe may be “ambitious”.

However, the number of gardaí in the units was being expanded and a new unit for Cavan was being established. He agreed with the Garda Superintendents Association calling for more armed Garda units and an earlier call by the Garda Representative Association, which represents rank and file Garda members.

Nurses warn significant numbers will not be able to work without childcare 21:01
Five men charged after garda car attacked at Traveller halting site in Cork 19:09
Half of Dublin’s Catholic priests cocooned due to Covid-19 measures 18:36
Coronavirus: Co Tyrone couple buried together after dying 20 hours apart 18:36
Coronavirus: Varadkar returns to practising medicine to help during crisis 17:56

1 Coronavirus: Varadkar returns to practising medicine to help during crisis
2 Donald Trump’s clown car administration has put the fear in all of us
3 Robbie Lawlor profile: A feared criminal with a long list of enemies
4 Coronavirus: Number of Irish cases nears 5,000 as 21 further deaths confirmed
5 Fewer deaths in Veneto offer clues for fight against coronavirus
Real news has value SUBSCRIBE