Tánaiste: publicans serving ‘takeaway’ pints ‘seem to be getting around the law’ 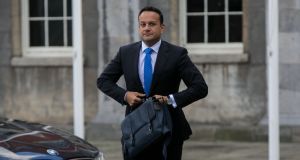 Tánaiste Leo Varadkar has raised the possibility of alcohol curfews during the current lockdown.

Mr Varadkar suggested the current closing hours for off-licence of 10pm could be curtailed.

Taoiseach Micheál Martin has already stated the phenomenon of “takeaway pints” from pubs is “not on”. It was leading to people gathering and spreading the virus, he added.

Mr Varadkar told Newstalk there was nothing wrong with people buying takeaway alcohol but raised the issue of publicans serving takeaway pints.

“They seem to be getting around the law by giving you a traditional kind of pint and then putting a lid on it,” he said.

New public health regulations around drinking alcohol on the streets would give gardaí more powers of enforcement, he told presenter Pat Kenny.

“So what we could potentially do is ban the sale of all alcohol after a certain point of time in the day. It’s that type of thing that we’re looking at.”

He said, however, banning takeaway pints could face legal difficulties and that it could lead to a ban on all takeaway alcohol.

Mr Varadkar said the current spike is down to five factors. He acknowledged the opening up of hospitality was one of them.

However, the Tánaiste believed household visits and family gatherings was the biggest factor contributing to the rise in numbers.

Inter-county travel from December 18th, the new variant and the issue of non-compliance at funeral, wakes and shebeens were the other factors, Mr Varadkar said.

“If you take those five factors together, that’s the best possible explanation.”