Covid-19: Car numbers fall again – but not as far as first lockdown 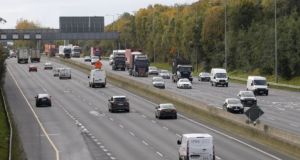 The number of cars on the State’s main roads has dropped significantly since the recent move to a Level 5 Covid-19 restrictions. File photograph: The Irish Times

The number of cars on the State’s main roads has dropped significantly since the recent move to a Level 5 Covid-19 restrictions, but the decline in is not as sharp as that seen during the first lockdown last year.

When the restrictions were first imposed on March 27th, the number of cars on the main roads initially fell by up to 70 per cent.

Volumes recovered somewhat later in the year, to within about 15 to 20 per cent of the typical figures for 2019.

Since the move to Level 5 around Christmas the highest drop in car traffic, measured on Monday, was on the M7 Limerick Southern Ring Road.

Volume were 57 per cent below the numbers for the same day last year at 10am, according to vehicle counters monitored by Transport Infrastructure Ireland (TII).

TII said car traffic just south of the North Border on the N1 at Jonesboro showed a decrease of 39 per cent on Monday when compared to a similar date last year.

In the case of the regional cities, the changes in car traffic volumes when compared with the start of Level 3 restrictions on October 5th were down by 29 per cent on the N6 Bóthar na dTreabh in Galway, down 42 per cent on the N40 in Cork and down 36 per cent on the M9 in Waterford.

Lorry traffic has remained fairly stable since since before the first lockdown as supply chains are considered an essential service.