Giving while living proves more difficult than expected for Feeney

Global recovery means endowment has ‘not shrunk as fast as expected’ 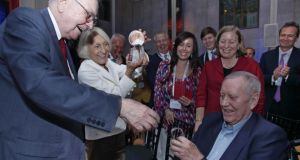 In June, billionaire investor Warren Buffett (left) described Chuck Feeney (right) as “my hero,” when presenting him with a Forbes 400 Lifetime Achievement award for pledging to give away billions during his lifetime to numerous causes in Ireland and overseas.

Irish American philanthropist Chuck Feeney’s dream of giving his entire multibillion fortune away to fund good causes is proving harder because of the global recovery.

A newly published report on his Atlantic Philanthropies foundation reveals his remaining $2.2 billion endowment has “not shrunk as fast as might have been expected”.

The “strength” of the endowment’s investment performance meant it had yielded a return of 14.7 per cent in 2013 and 10 per cent in 2012, according to the report by Tony Proscio of the Duke University Center for Strategic Philanthropy & Civil Society.

This meant that, despite giving away $336 million in 2013 and $357 million in 2012 to good causes in Ireland and internationally, Atlantic has not been able to wind itself down as fast it would like.

Atlantic says, however, that it plans to “accelerate” its philanthropy from 2014 in order to ensure it does finally wind down after 35 years of giving.

The report says that Atlantic expects to have given away “close to $8 billion by the time it closes” in 2017, after making its first grant in 1982.

In 2013, according to the report, the board of Atlantic decided to change “the method of ending” its philanthropic work: “no longer as a diminuendo, as originally envisioned, but as a crescendo of major grants and expansive ambitions”.

This “new phase” Atlantic said was called Global Opportunity and Leverage, or Goal, and it would aim to ensure its “past work took lasting root”.

In June Warren Buffett, the renowned billionaire investor, described Mr Feeney as “my hero,” when presenting him with a Forbes 400 Lifetime Achievement award for pledging to give away billions during his lifetime to numerous causes in Ireland and overseas.